The Program
The production of historical documentary films has reached an all-time high due to the proliferation of subscription television stations and streaming Internet websites over. Almost without exception, these programs have been created by filmmakers and not historians. While some filmmakers use advisors from the academic community, many historians believe they have been used as “window dressing” by producers looking for financial support from entities such as the Corporation for Public Broadcasting or the 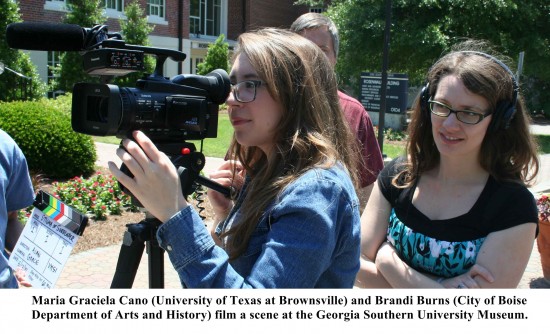 National Endowment for the Humanities. Others feel that their input is consistently sacrificed to accommodate the narrative conventions of motion pictures. The Visual History Summer Institute (VHSI) helps remedy this situation by instructing professional historians how to use the basic tools of media production to create their own programs. In 2014, Georgia Southern University hosted the first VHSI. Seven visiting scholars from around the United States and Canada participated in the intensive 12-day course and developed a number of interesting projects.

In May 2016, the institute will again bring together educators and public history professionals to learn about the latest film technologies and discuss ideas related to historical film production. Classroom lessons will include both hands-on work with equipment and discussions of the theories and practice of visual communication. Each day is divided into three sessions that will run from 9:00-12:00, 1:00-4:00, and 5:00-7:00 for a total of 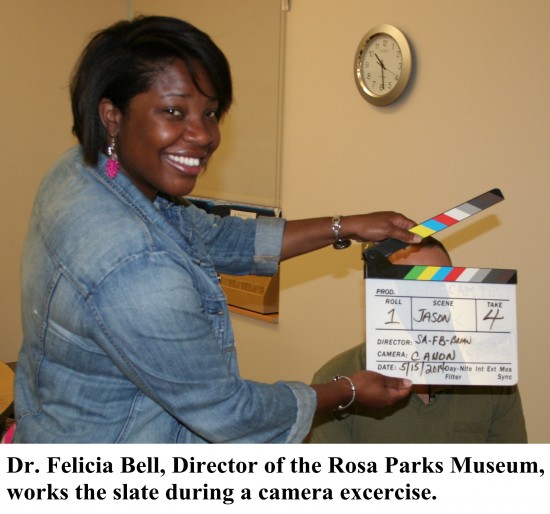 eight hours of instruction. Each block will cover a variety of topics including idea development, budgets, proposal writing, storyboards, screenwriting, postproduction, and distribution. These sessions will be balanced with technical training covering the use of the latest digital cameras, lighting, sound, and editing. There will also be teleconferences with a PBS producer Eric Stange (The War that Made America and Murder at Harvard) and educational film distributor Andrea Traubner (Filmakers Library and Alexander Street) to discuss strategies for broadcasting and selling completed films. There will also be a guest lecture by teen author Maya Van Wagenen whose New York Times bestselling memoir was purchased by DreamWorks Studios in 2014. She will discuss the process of selling your non-fiction work to Hollywood. There is no expectation that the participants will become experts in two weeks, rather they should acquire enough proficiency to continue developing their proposed films when they return to their home institutions. 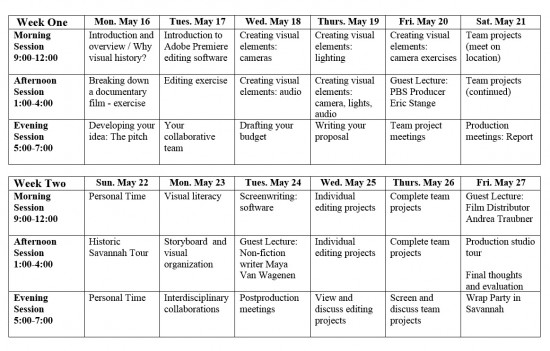 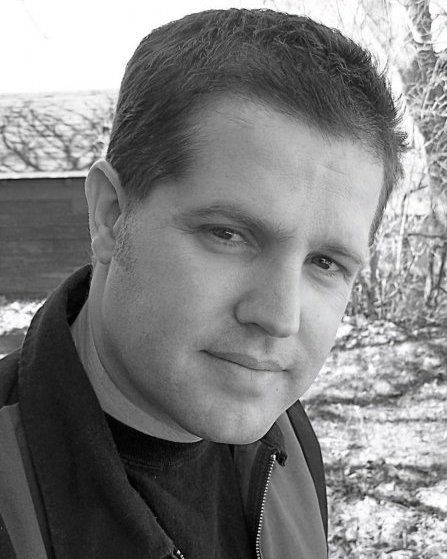 Dr. Michael Scott Van Wagenen, associate professor and public history coordinator at Georgia Southern University, first proposed the creation of the Visual History Summer Institute at the National Council on Public History Annual Conference in 2011. He was met with immediate support and enthusiasm from other scholars anxious to learn the tools of filmmaking. While an undergraduate student, Van Wagenen noticed the divide between professional history and filmmaking. In a quest to bridge these fields, he worked actively as a screenwriter, producer, and director while earning bachelors, masters, and doctoral degrees in history. In the past 25 years, he has written, produced, directed, and/or edited over twenty documentary films. His work has twice won highest honors at the National Education Film and Video Festival and been screened at the American Museum of Natural History, the Smithsonian National Museum of Natural History, Margaret Mead Ethnographic Film Festival, Chicago Latino Film Festival, and several other venues. He is also the author of two academic monographs as well as several articles, chapters, and encyclopedia entries. 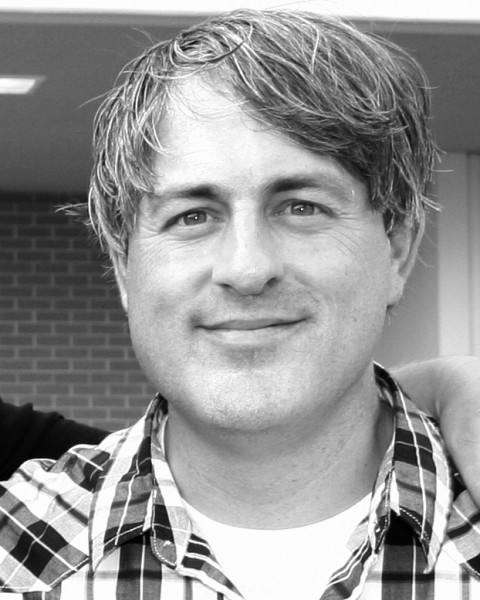 Ryan Noble is the institute’s technical director and instructor. He is an assistant professor of Communication Arts at Spring Hill College in Mobile, Alabama. Noble holds a Bachelor of Arts degree in film from Brigham Young University and an MFA from the Dramatic Writing Program at Arizona State University. His experience includes writing, directing, and producing over 30 television commercial spots, three television documentary films, one feature documentary film, and two narrative feature films. His work has won awards at the Arizona International Film Festival and the Orlando Hispanic Film Festival. Prior to joining Spring Hill College, Noble was a full-time faculty member at Collins College for fifteen years where he developed and wrote the curriculum for the Film and Video Production program. Noble and Van Wagenen have collaborated on a number of historical and ethnographic film projects in the past including Low and Slow, Los Huicholes: Art – Culture – History, and A Day With Sheriff Joe. 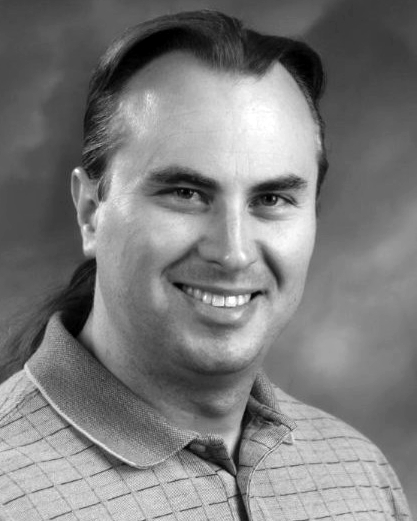 Jason Knowles of the Department of Communication Arts serves as a VHSI instructor. Originally from northeast Kansas, Jason joined Georgia Southern University in fall 2013 as an assistant professor and currently teaches digital filmmaking and cinema studies courses under the Department of Communication Arts’ newly approved Multimedia Film Production program (MMFP). With graduate degrees in the fields of motion pictures and higher education, Jason brings with him over 16 years of college-level teaching experience. In the past he has facilitated courses in digital media for Virginia Tech, Bryan University, Emporia State University, and the University of Central Arkansas. Jason’s current interests in filmmaking include writing, directing, and editing science fiction movies, action-adventures, romantic comedies, and documentaries. He endeavors to bring a unique perspective to the education of motion pictures by inspiring his students to explore how the visual narrative of cinema and the cross-disciplinary aspects of the filmmaking process apply to collaborative learning in all fields. His ongoing research into critical pedagogy – the curricular integration of critical film theory & history with film practice – reflects his two passions for teaching and art. 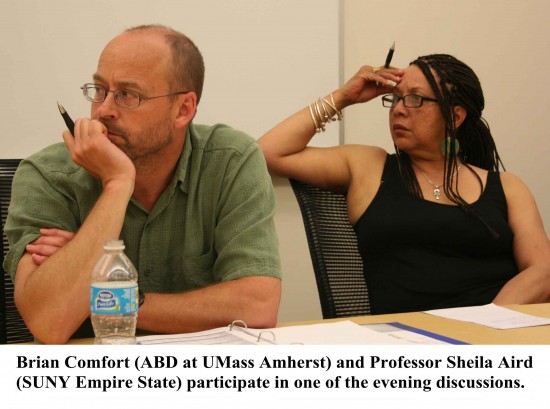 the cost of instruction for all participants. On-campus housing in four-bedroom suites will be available for $25 a night. Private hotel accommodations may also be made in Statesboro. Participants will need to pay for first and last nights’ stay in Savannah. We are contracting a block rate at an airport hotel with a free shuttle for those nights (May 15 and 27). We will put participants in contact with each other in advance in case any would like to share rooms on those nights. Meals will be the responsibility of the participants, and we will make convenient and affordable options available on site. The institute will provide transportation to and from the airport hotel and for all scheduled events, including trips to Savannah. 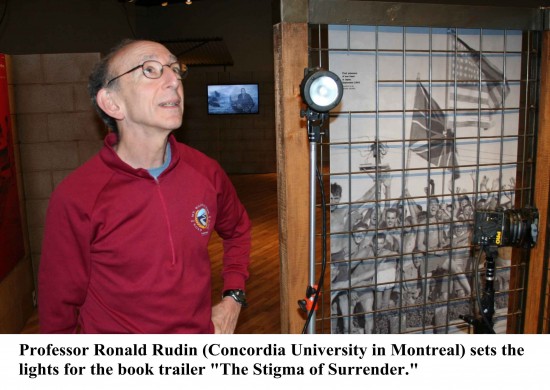 professionals, and history graduate students. Please submit a curriculum vitae, personal research statement (250-500 words), and description of the film project you would like to develop at the institute (250-500 words). Please email applications to mvanwagenen@georgiasouthern.edu. The soft deadline for applications is March 15, 2016.

For more information contact Michael Van Wagenen at the email address above or (912) 478-5466.