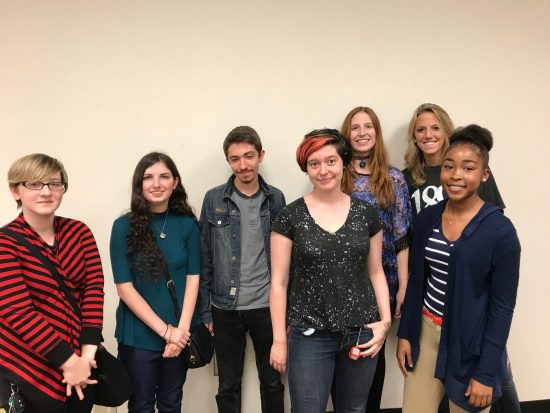 The Department of Writing & Linguistics Professors Benjamin Drevlow and Chris Smith are pleased to announce the winners of the 2017 Fledge First-Year Writing Awards. The winners are as follows:

These winners, and other students selected for publication in the 2017 Fledge, will read at the Fledge First-Year Writing Awards ceremony, held on Wednesday, April 26, 2017, in Nessmith Lane room 2911 from 7:00 to 8:00. All contributors, students, and faculty are invited. For more about Fledge, or the ceremony, please contact Benjamin Drevlow.

The Department of Writing and Linguistics is housed in the College of Liberal Arts and Social Sciences. The College of Liberal Arts and Social Sciences is the largest of the eight colleges that make up Georgia Southern University, and it plays a central role in every student’s core of knowledge. CLASS, also described as the University’s College of the Creative Mind, prepares students to achieve academic excellence, develop their analytical skills, enhance their creativity, and embrace their responsibilities as citizens of their communities, their nations, and the world.