When the University Writing Center moved to its current location in the Forest Drive Building in 2001, there was a lot of wall space to fill.

The Center’s director asked faculty members, deans, and department heads at Georgia Southern to provide quotes about the importance of writing in their disciplines. In hopes that posting these statements in the Writing Center (along with pictures of the faculty members), students could see that writing was important in every discipline – be it business, engineering, the Fine Arts, or liberal studies.

The response to this initiative was so positive, the Center expanded its efforts and asked national figures – politicians, celebrities, authors, editors, musicians, athletes, and corporate CEOs – to contribute similar statements. Once again, the response was overwhelmingly positive, and the Center received more than 50 personal letters attesting to the value of good communication skills.

People who have generously shared their thoughts, reflections, and observations include: 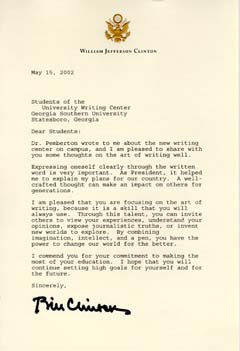 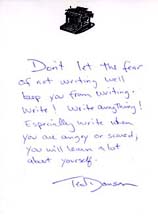 YOU CAN MAKE APPOINTMENTS IN ADVANCE (EITHER ONLINE OR FACE TO FACE) BY CLICKING ON THE LINK BELOW; you are also welcome to drop-in at the Writing Center, and if a tutor is available, we’ll be happy to work with you.

Click on this link to register and make an appointment. Click HERE for detailed instructions about registering and holding online appointments.