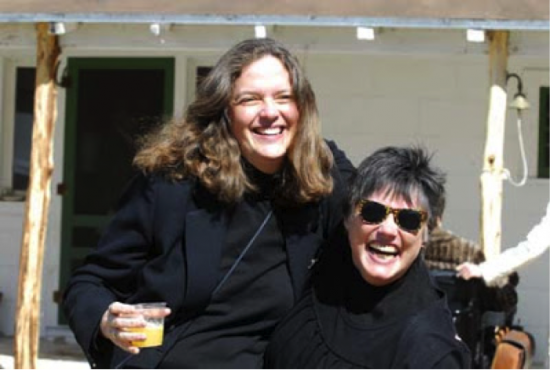 The Patti Pace Performance Festival returns to Georgia Southern University to celebrate the 25th anniversary of the signing of the American with Disabilities Act and to honor and learn more about (and from) persons with disabilities in order to foster a culture of inclusion across our campus and with our local community.

The 4 day program will feature Terry Galloway (film director, author, workshop leader, and performing artist), and her partner Donna Nudd (performance scholar, film and performance director, and workshop co-leader) to Georgia Southern to meet with student groups across campus, to show and discuss their award-winning film shorts related to working with persons with disabilities, and to provide a key note address and lead performance workshops for students. In addition, Galloway will bring to Georgia Southern her original solo performance “You Are My Sunshine: A Kind of a Love Story”. Students and faculty from across the US will be attending the performance festival.

Scholar-in-Residence Program: What benefit to students?
Students across campus, students in participating department sponsors (Communication Arts, Literature and Philosophy, and Writing and Linguistics), and students who use the services of other supporting campus organizations (Students with Disabilities Center and the Multicultural Student Center) will have the opportunity to learn from and intellectually engage the guest scholars and professionals, who have dedicated their life and work to the understanding and inclusion of persons with disability. These activities include presentation and discussion of a short award-winning films, a reading from an award-winning book, a two-day performance workshop, and a solo performance.

The performance festival will also expose Georgia Southern students to theater and performance studies practitioners and scholars from across the country. This provides Georgia Southern undergraduate students an opportunity to learn from professional practitioners in the field, as well as workshop and perform with, receive feedback from, and network with students and faculty from other colleges and universities. The festival also provides Georgia Southern students considering attending graduate school the opportunity to meet with graduate students and professors from universities with graduate programs in communication studies, performance studies, and theater.

All events during the 4 day program are offered free of charge. Registration is required for the Patti Pace Performance Festival.
All students and faculty are welcome to attend for free by contacting Rebecca Kennerly at rkennerly@georgiasouthern.edu. Students and faculty must register ASAP (seating limited) or by Jan. 27 at the latest.

Both the Friday, Jan. 29 performance of “Reflections on the ‘Sweet Life’: The Vidalia® Onion Oral History and Performance Project” and Saturday, Jan. 30 performance of “You Are My Sunshine: A Kind of a Love Story” are open to the public.

Date: Thursday, Jan. 28
Time: 1-2 p.m.
Place: Sanford Auditorium
Title: Mickee Faust’s Gimp Parade
Website: http://www.mickeefaust.com/
Description: Scholars-in-Residence Terry Galloway and Donna Marie Nudd will show and discuss a series of their award-winning comic video shorts. Galloway and Nudd will describe their mixed ability company, how they work, tell the story of the genesis of each film, and then field questions about each video. This program is designed for students and faculty interested in issues of representation in connection with people with disabilities, including (but not limited to) Journalists, Film Makers, Marketing and Public Relations Professionals, theater and Performance Artists etc. All students and faculty welcome.

Date: Thursday, Jan. 28
Time: 7-8 p.m.
Place: Arts Building Auditorium
Title: Book Reading from Mean Little deaf Queer: A Memoir by author Terry Galloway
Review: Click Here
Description: Scholar-in-Residence Terry Galloway reads from her award-winning book Mean Little deaf Queer: A Memoir. The program will include a discussion and Q & A session with the audience. Reading sponsored by Dept. of Writing and Linguistics, and the Dept. of Literature and Philosophy. All students and faculty welcome.

Date: Friday, Jan. 29-Saturday, Jan. 30
Time: 8:30 a.m.-5:30 p.m. each day
Place: Black Box Theatre, Center for Art and Theatre
Title: Patti Pace Performance Festival
Description: Scholar-in-Residence Terry Galloway will provide the key note address : “On Being Told ‘No’”, followed by Galloway and Donna Nudd leading students in a performance workshop. Students from 10 different schools from across the US, including Georgia Southern students, will convene to work with Galloway and Nudd during the festival.
ALL STUDENTS AND FACULTY WELCOME – REGISTRATION REQUIRED.
Contact Rebecca Kennerly at rkennerly@georgiasouthern.edu by Wednesday, Jan. 27 to register for the festival. Students and faculty must register ASAP (seating limited) or by Jan. 27 at the latest.

Terry Galloway is a German born/Texas raised, deaf, lesbian, artist and activist. During her 38-year career as an alternative artist working on the theatrical fringes, she has won grants, fellowships and awards in theater, literature, radio and video from the National Endowment for the Arts, the Texas Institute of Letters, PEW Charitable Trust, Columbia University, Austin’s Circle of Theatre’s, NYC’s Villager, the Kennedy Center, the Florida Division of Cultural Affairs, Theatre Communications Group, Mid-Atlantic Arts, the Puffin Foundation, Public Radio News Directors Incorporated, Federal Arts in Education, the National Communication Association, the Dana and Christopher Reeve Foundation, the Broadcast Education Association, the Pixie Awards, and the Corporation for Public Broadcasting. She is a member of SAG, the Dramatists Guild, The Women’s Project, PEN and has served on the boards of the National Performance Network and Women in Theatre Program. In 2013 she was one of the five artists in the nation nominated for the California Institute of the Arts’ Alpert Award for Adventurous Theater.

Her four solo shows Heart of a Dog, Out All Night & Lost My Shoes, Lardo Weeping and You Are My Sunshine have been produced at more than a hundred venues nationally and internationally. Heart of a Dog, Out All Night and Lardo made their national debuts in NY; Out All Night made its international debut in London, Lardo Weeping in Mexico City. In NY she was among the original performers at Limbo Lounge, W.O.W and P.S.122 and toured nationally and internationally with the P.S. 122 Field Trips. Two of her plays have been published in their entirety; all have been published in excerpted form. Additionally, she has to her credit over 17 articles about alternative theatre practices and queer disability activism, most recently in It Gets Better, Gay Shame and Cast Out Queer Lives in Theater. Her memoir Mean Little deaf Queer, published by Beacon Press in 2009, was a Lambda finalist and winner of the Golden Crown Award.

Galloway has also co-founded three community based theatres. Two are in Austin Texas — the 35 year-old Esther’s Follies and the 12 year-old Actual Lives Austin. Her professional association as a writer, director and performer with Esther’s (once known for its political commentary, now as a popular and enduring professional musical cabaret) ended after five years when she left Austin to become the Heckscher Fellow at Columbia University. Actual Lives Austin, a workshop/theatre company for adults with disabilities, was based on classes she devised as a Visiting Artist at both the California Institute for the Arts and at the University of Texas, Austin. She steered that company to their national debut at the Kennedy Center’s VSA Festival of the Arts in 2004. The third theatre is the 27 year-old Mickee Faust Club in Tallahassee Florida. The oldest queer-disability centered non-profit community theater in the deep south and one of only five worldwide, Faust teaches novices the art of writing, performing and producing original cabarets, radio shows and short comic videos. Under her guidance, Faust has generated over 600 original theater scripts, produced 49 hour long cabarets of original material, been awarded 24 national and regional grants produced 21 video shorts that have been featured in over 106 national and international film festivals and garnered over 31 awards of filmmaking excellence– recently the Gold Pixie Animators Award and Best Narrative from the Broadcast Education Association. In 2012-2013 Faust was the keynote performance for three major national or international conferences including the Association for Theatre in Higher Education.

In 2014, three years after receiving a cochlear implant that allowed her to hear for the first time since she was nine, she wrote a six-character musical – The Ugly Girl: A Musical Tragedy in Burlesque that made its international debut at Liverpool’s famed DaDaFest International. Her interest in queer theatre began when, as a student she performed male roles at the University of Texas in Austin’s Shakespeare at Winedale Festival. Her interest in theatre activism began when she and nine other women collaborated with Berliner Ensemble Playwright Heiner Muller on the American adaptation of his play Mauser. Her interest in disability activism began when she first starred in and then became co-writer of a PBS series created to encourage and empower children with disabilities. Her work since that time has been grounded in principals from all three experiences.

Donna Marie Nudd is a Professor of Performance Studies in the School of Communication at Florida State University where she teaches classes in Gender Studies, Performance, Film Adaptation, and Teaching Communication in College. She is the Executive Director of the Mickee Faust Club in Tallahassee, Florida, a theatre company that produces three original cabarets a year. Mickee Faust, in connection with Diane Wilkins Productions, also produces feminist, queer and disability-themed video shorts that have been featured at over a hundred film festivals in the US and abroad. Donna has worked collaboratively with Terry Galloway for thirty years, most often as director and dramaturge.

If you have a disability and need assistance or accommodations such as wheelchair access, sign language interpreter, menu modification, or alternative formats of program materials to fully participate in this program, please contact Rebecca Kennerly at rkennerly@georgiasouthern.edu by January 22. Advance notice is necessary to arrange for some accessibility needs.