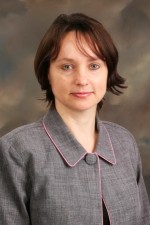 Olga Amarie joined the Department of World Languages and Cultures in June 2011, and is currently Professor of French. She completed her B.A. in French and English at “A. Russo” State University, Bălţi, Moldova. Her dissertation entitled “Image, son, et mot dans Un homme qui dort de Georges Perec” is an interdisciplinary study and it defines several semantic constraints that are voluntary, like formal constraints in the Oulipian sense, but are not as obvious or rigorous. Perec’s own prospect in Un homme qui dort which can be seen in terms of the existentialism of the day also leads in its tendency toward a movement (OULIPO) that, in its way, contradicts the existentialist philosophy that was so prevalent.

Dr. Amarie’s primary areas of research are twentieth and twenty-first century French literature and cinema. She has published articles on Georges Perec, Octave Mirbeau, Juliette Adam, Remy de Gourmont, Raymond Roussel, and stereotypes in short stories. She translated from Romanian into English The Word by Ion Găină in collaboration with Rosemary Lloyd. She has presented at international, national, regional, and state conferences. Dr. Amarie has been recognized as the best of Graduates by “A. Russo” State University in Moldova. She was also the recipient of the Grace P. Young Graduate Award in recognition of excellent achievement in French Literary Studies at Indiana University-Bloomington.