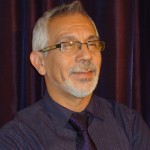 It is with sadness for the moment but with profound gratitude for an exemplary career that I announce the retirement of Dr. Jorge W. Suazo, effective August 1, 2020. Jorge began teaching English in Chile in 1973. Twenty years later, in 1993, he began teaching Spanish at Georgia Southern. Having served GS for nearly three decades, Jorge is the founding director of the Southeast Coastal Conference on Languages & Literatures (SECCLL) and the founding editor of The Coastal Review. He has taught almost every course in our curriculum and enjoys the challenge of teaching three preps in a single semester. He has led numerous study abroad programs, participated and chaired a number of committees, and mentored countless students. More than a colleague, he has been a true friend to the members of the department, opening his heart and his home to one and to all. His openness, generosity, and enthusiasm for life have brightened his surroundings and lifted us all. Although we will miss his service on committees and his presence in the classroom, he has agreed to continue to serve as the director of the SECCLL for at least a year or two, if not more, so we will continue to see him in the IAB on occasions, and, pandemic willing, we will soon be able to join him in his constant celebration of life at his home and in other locations.