Home > Uncategorized > Department News for May 2017

Department News for May 2017 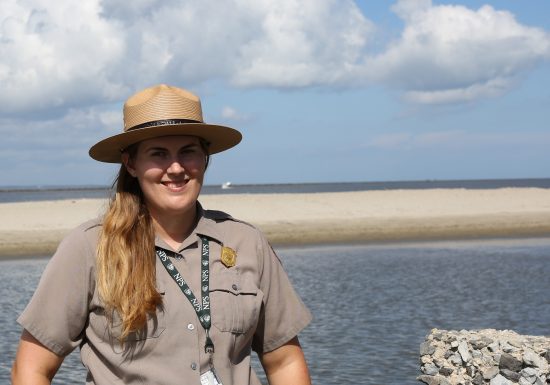 History graduate student Caitlin Woodie has been offered and accepted a full-time position with the National Park Service. She will be working as a Museum Technician for the Lake Superior Museum Collections Center located at Keweenaw National Historical Park in Calumet, MI.  She will work with accessioning, cataloging, environmental monitoring, and exhibit upkeep at the visitor centers for three different national parks (Isle Royale National Park, Pictured Rocks National Lakeshore, and Keweenaw National Historical Park). Caitlin previously worked as the Pathways Intern with the National Park Service at Fort Pulaski National Monument.  This position will allowed her to be converted to a permanent employee upon her graduation from the MA and Public History program.  Her internship involved working within the Interpretations and Cultural Resource divisions at the National Park, conducting tours, creating interpretive programming, and working within museum collections.  (see attached photo)

Jeffrey D. Burson presented a paper, entitled, “Varieties of Enlightening on the Margins of Enlightenment Catholicism” at the annual meeting of the Consortium on the Revolutionary Era, c. 1750-1850 held in Charleston, S.C. on Friday February 24, 2017.  On April 21, 2017, at the annual meeting of the Society for French Historical Studies held in Washington, D.C., he also presented a paper entitled, “Revising the Soul and Reclaiming the Natural Sentiment of Humanity from the Jesuits to the ‘Antiphilosophes’.”  In addition, he commented on a panel about recent research in Early Modern British History at the Georgia Association of Historians on Jekyll Island, February 18; and he recently organized, and presented upon, an interdisciplinary round table about the teaching of World History at the Southwestern Social Science Association in Austin, TX, on April 14. Finally, Dr. Burson currently serves as a member of the first annual Charles Crouch Memorial Paper Prize at the Consortium on the Revolutionary Era.

Kathleen M. Comerford co-edited From Rome to Zurich, Between Ignatius and Vermigli (Brill), released in March 2017, with Gary Jenkins (Eastern University) and Torrance Kirby (McGill University).  She participated in the Jesuit Studies Roundtable (Loyola University of Chicago, March 29, 2017) and gave the paper “Vernacular Texts in Northern Jesuit College Library Collections,” at the 2017 Renaissance Society of America meeting in Chicago, IL on April 1.