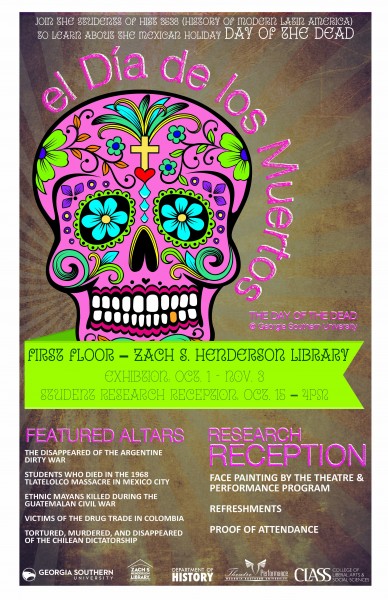 The students from HIST 3538 (History of Modern Latin America) will be creating an exhibition at the Zach S. Henderson Library entitled, “Day of the Dead: Remembering the Victims of Atrocities in Latin America.” The students will be using the popular Mexican celebration of Day of the Dead as a vehicle to educate the campus community about state-supported violence that occurred throughout Latin America during the Cold War. The featured exhibits include, the disappeared of the Argentina Dirty War, students who died in the 1968 Tlatelolco massacre in Mexico City, Mayans killed during the Guatemalan Civil War, victims of the drug trade in Colombia, and the murdered of the Chilean dictatorship. The exhibition is open from October 1-November 3 in the first floor of the library. On Wednesday, October 15 at 4pm there will be a public presentation of student research followed by a reception which will include Day of the Dead face painting by students in the Theater and Performance Program.

The Department of History thanks the event sponsors: The Zach S. Henderson Library, the Theatre & Performance program, and the College of Liberal Arts & Social Sciences