“The pleasure I derive from collecting folk art is now matched by my pleasure in sharing it with others by donating my collection to Georgia Southern for permanent display.”

The question of what ‘Folk Art’ is a question raised by academia and not one raised by the artists themselves. The Oxford Dictionary defines folk art as: “Noun  Artistic works, as paintings, sculpture, basketry, and utensils, produced typically in cultural isolation by untrained often anonymous artisans.”  The dictionary even goes on to define what defines Folk Art saying, “[…] marked by such attributes as highly decorative design, bright bold colors and flattened perspectives with strong forms in simple arrangements.”  What is Folk Art, is a question raised by academics who seek to categorize, compartmentalize and define every aspect of human life.  For the academics, defining and seeking out Folk Art is another outlet of study and publication.  For many, folk art is an untapped resource of vernacular, the truly rural vernacular of the people.

Therefore, some see Folk Art to grasp at nostalgic straws of a disappearing rural landscape in America.  Rural America is a fading idea and Folk Art captures pieces of that ruralness.  It ably captures the humble beginnings of America and the “Go West young man” spirit of Manifest Destiny.  However, Folk Art cannot be compartmentalized even within that definition.  Folk art is being broken down everyday into categories that define and change it.  Art Brut, Raw Art, Outsider Art, Visionary Art, Memory Art are any number of sub-categories that ‘Folk Art’ is being broken into everyday.  True, it is very necessary to ‘save’ Folk Art.  It is dying piece of Americana and indeed folk art around the world seems to be suffering from the same fate, from urbanization, changing attitudes and what not.

Robert Lowry, from the Lowry Gallery in Athens, Georgia had this to say about Folk Art: “Folk Artists aren’t in it for the money.  They are driven by the pure need to create and that may be a higher power or a primal need, but they just have to create.” Lowry puts it best, Folk Art with a capital F and A is a primal drive.  There is no education, no training, it is an unstoppable urge.  However, it is possible to argue that Folk Art is less the primal uninhibited drive to create.  Practical Folk Art, is still folk art, is it not?  I would argue, that no, it is not.  Practicality is born from necessity.  For some, potters, the art serves the penultimate practical purpose.  Protection of food and livelihood, but just because pots are necessary does not inherently mean that they have to be boring or bland.  Perhaps, the potters feel the primal urge to create and in response to that urge that create practical and beautiful items.  This line of argument excuses them from the necessity of the pot and allows them creative freedom.

Nevertheless, Folk Art is art that originates from the people.  Not from the elite or the well trained artist.  Folk Art is fundamentally the art of the vox populi a creative outlet of those who do not have the training.  The job then, of the academic, is not to categorize it, but to protect the vox populis’ art.  The case is simple then, Folk Art is a disappearing medium for the people as urbanization spreads and old customs die throughout America.  What, Folk Art is now is a reactionary statement of some Americans to the loss of the “good ol’ days” and some seek to preserve it.  Folk Art, particularly in America does not follow the definition of the Oxford Dictionary at all. It is ever changing and adapting to the desires of the people.  Once, it was anonymous, rural, and practical.  Next it was primal, full of spirit and new life.  Now Folk Art it is reactionary, the voice of the vernacular and it craves nostalgia, the spirit of the once and then.

Smith Callway Banks was a native of Statesboro and has many loves in his life – one of which is collecting folk art. Banks began curating his collection in the 1980’s when he bought his first face jug. He has continued to add to his extensive compilation ever since. The Smith Callaway Banks Southern Folk Art Collection has grown to well over one thousand pieces of art.This collection pays tribute to the creative spirits who have enriched Banks’ native state of Georgia, but the entire southern United States as well. Artists in the collection hail from the Carolinas. Florida, Alabama, Mississippi, Louisiana, Virginia, Tennessee and Texas. Georgia Southern University is honored to house the collection, knowing students, faculty and the community will be inspired to research folk art as an integral part of southern history.

Through his generous donation, Banks is elated that the public will have an opportunity to enjoy his “uglies and whimsies” as much as he. 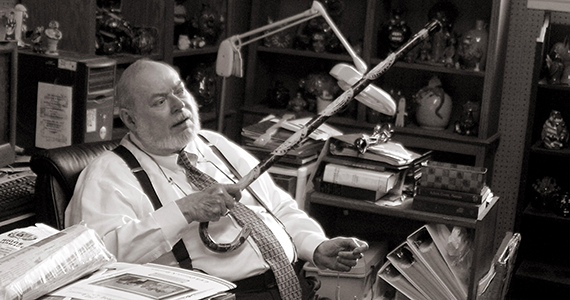 Smith Callaway Banks joined the family dairy business at an early age, dipping ice cream as a young boy and as a young man, delivering milk to local residents. A graduate of Statesboro High, he earned the Bachelor of Arts degree at Emory University, and after post graduate studies at the University of Georgia, he returned home and was married to Willa D. Alexander in 1962.

A businessman, he was President of City Dairy, owner of Smith Banks Antiques and a board member of Statesboro CATV, Inc. During the last four decades of his life, he invested both his time and resources in projects that benefit citizens of all ages and races. For eighteen years, he was a member of the Statesboro Regional Library Board of Directors, serving several years as chairman. He was both a founder and a leader of the Bulloch County Historical Society. His public achievements include the Brannen Genealogy Room in the local library and numerous publications about the history and people of Bulloch County.

Banks was the official historian both of the Bulloch County Historical Society and of the Ogeechee Rifles Camp, Sons of Confederate Veterans. He is a recipient of the Deen Day Smith Service to Mankind Award as well as the Deen Day Smith Lifetime Achievement Award. In 2007, he donated a large and unique collection of Southern Folk Art to Georgia Southern University.

While the BFSDoArt displays selections from the Betty Foy Sanders Georgia Artist Collection, there are occasionally objects that are not on view. If you are interested in viewing any artworks that are not on view, please contact the Gallery Director to schedule an appointment to look at the object(s). Please note that all requests require seven-day notice and staff can not accommodate ‘same day’ requests.