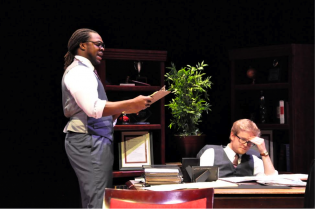 On Thursday, Feb. 5, Georgia Southern University students will give an award-winning performance of Race; a Play at the Albany Municipal Auditorium, 200 N. Jackson Street, Albany, Georgia.

Georgia Southern’s performance of Race, a play by David Mamet, received two high recommendations from adjudicators that placed the performance among 60 other nominated shows for a Kennedy Center American College Theatre Festival (KCACTF) performance for Region Four. All of the student designers for the play were nominated for awards as were the stage manager and dramaturg.

“Race explores the tension between perception and intent when a law firm of three attorneys, two black and one white, defend a white man charged with a crime against a black woman,” said Annie-Laurie Wheat, a Professor of Theatre at Winthrop and respondent for the selection committee. “Thought-provoking and challenging, the play raises questions about how each of us perceives race in today’s world and will leave audiences with more questions than answers. Because of adult subject matter and strong language, the play is recommended for mature audiences.”

Though the Theatre & Performance Program has been invited to attend the festival in the past, financial obstacles have prevented them from doing so.

“We have an incredibly strong performance tradition here at Georgia Southern and being able to take this production to festival is a great opportunity for us to share that tradition with our peers and colleagues at other schools, said Associate Professor at Georgia Southern and Director for Race Lisa Abbott. I am incredibly proud of this cast and design team – they really show what the Theatre & Performance Program has to offer.”

Since its inception, KCACTF has given more than 400,000 college theater students the opportunity to have their work critiqued, improve their dramatic skills and receive national recognition for excellence. More than 16 million theatergoers have attended approximately 10,000 festival productions nationwide.

The cast and crew will rehearse the performance for the next few weeks leading up to the festival. The play will begin at 8:30 p.m.