Georgia Southern to present classic ‘Hamlet’ with a modern twist

Security footage, Snapchats and live news teams will take over the Center for Art & Theatre this week in the Shakespearian classic, “Hamlet.”

The crew has been working on the play for over a year and the theatre staff has spent months adapting the staging and script to take place in the modern world.

“We’ve been in the pre-planning stage since April,” said Lisa Abbott, the director of the show. “I’ve been working with the script all summer. We casted the first week of school, our cast has been with us since August. We started shooting most of the film stuff in fall, and we hit rehearsal in the spring.” 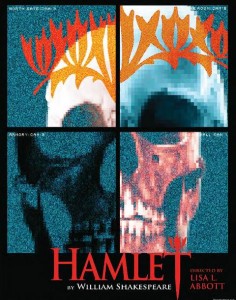 Hamlet will run from April 2-9 in the Black Box Theatre located inside the Center for Arts & Theatre. Tickets are $5 for students and $10 for staff and community. All performances start at 7:30 p.m. and there will be matinee on Sunday that begins at 2 p.m.

“Hamlet” is the first ever collaboration between the theatre program and multimedia film production program at Georgia Southern University.

“We have an amazing cast. Our Hamlet is Tsiambow Akuchu. Our Ophelia is a transfer student, along with our Claudius,” Abbott said. “There’s around thirty in the cast, it’s a big crew. I have one of my most seasoned stage managers and a really solid crew.”

The story itself is filled with twists and turns, and the Georgia Southern theatre department has added an entirely new element by taking characters and throwing them into the modern era.

“I think it’s about trust. That’s the theme we’ve been playing on. Hamlet doesn’t know who to trust, or what to trust, he has to make a decision based on that. We’ve set him in an environment where he’s being spied on all the time, he realizes he’s being videotaped but he doesn’t realize who’s seeing it. A lot of people think Hamlet is ‘The Lion King’, and in a way it is, we’ve just intensified,” Abbott said.

For those of us who don’t spend our time studying Shakespearean literature, here’s a guide to “Hamlet”:

(This play is over 400 years old, so yes there are spoilers. Do better.)

Hamlet opens this Wednesday and will run from April 2-9 in the Black Box Theatre located inside the Center for Arts & Theatre. Tickets are $5 for students and $10 for staff and community. All performances start at 7:30 p.m. and there will be matinee on Sunday that begins at 2 p.m. Audience members are encouraged to arrive early.