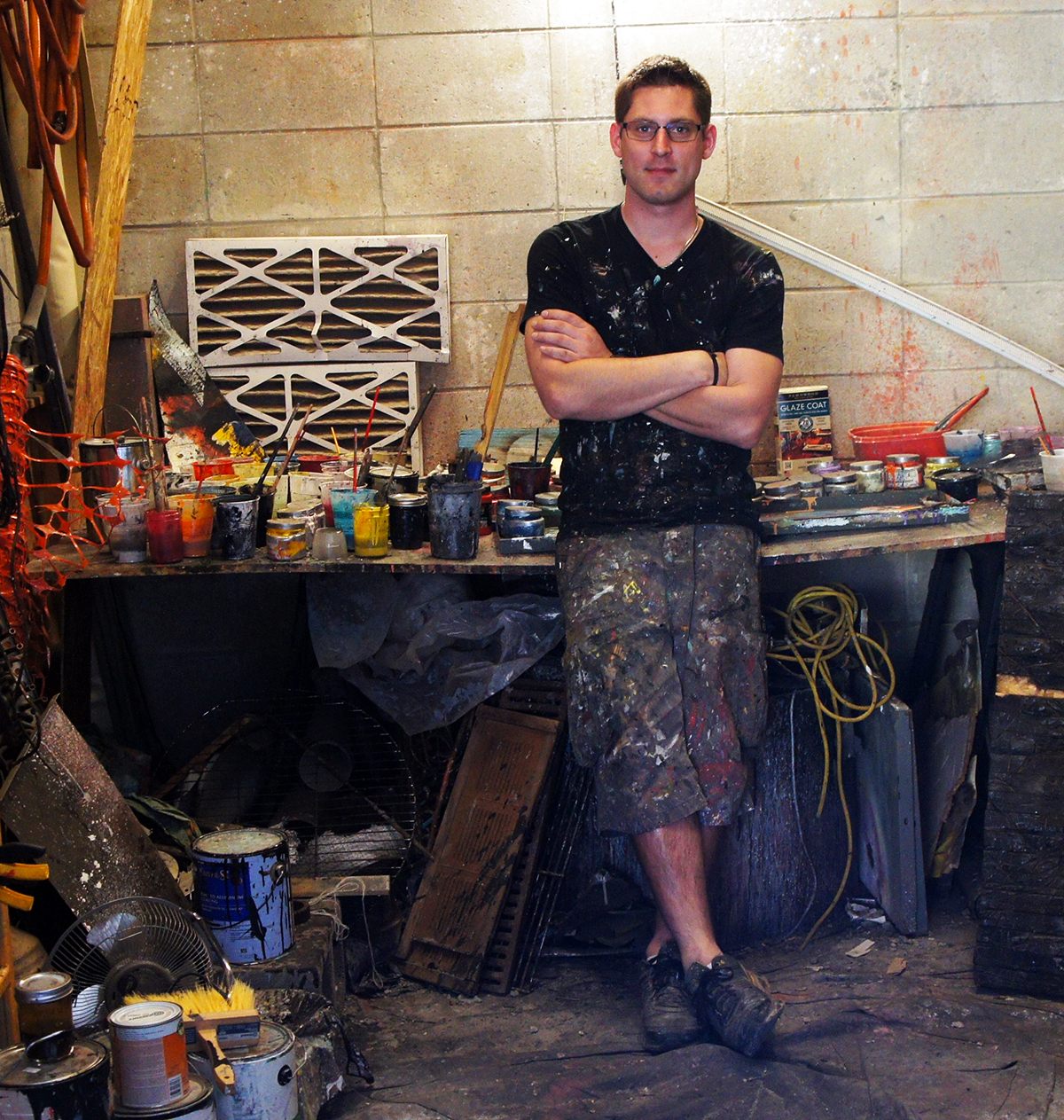 Max Rebel in his studio. See his exhibition, Fragmented, in the Center for Art & Theatre from March 17-28

Max Rebel is no stranger to moving around. After relocating from Germany to Georgia in 1998, Rebel eventually landed at Georgia Southern University. In 2010, Rebel received his Bachelor of Fine Art in graphic design from Georgia Southern and enrolled into the Master of Fine Art (MFA) program to study graphic design. Three semesters after his acceptance, Rebel realized that graphic design no longer held his interest. “A lot of graphic design work is client based. I wanted to do something different and develop my own content, ideas, and techniques and not just follow instructions,” Rebel said.

Rebel applied and was accepted into the MFA program for 2-Dimensional studio art. During his early semesters in the program, Rebel experimented with a wide range of 2- dimensional techniques until he arrived at his mixed media focus.

His current exhibition, Fragmented, was inspired by a journey in the community where he started to notice that certain objects stood out to him. “ During my explorations, I came across these two metal wooden door panels that were hanging in a back alley and although they were not traditionally considered art, I looked at them as these beautiful art forms on the wall that were constructed out of burnt wood and used metal that I never considered mixed media before,” said Rebel.

To inform the artwork in Fragmented, Rebel would explore various rural and urban communities in search of neglected back alleys and collapsed warehouses.  Rebel’s goal was to find abandoned pieces of industrial material and manipulate the items into artwork. It was important to Rebel that each material maintains many of the same characteristics they possessed when he found it. In addition to reflecting on the impact of time and how natural phenomena changes everyday objects, Rebel also wants to highlight that humans are effected everyday as their environment alters.

Rebel now embraces change and is thankful he found his niche with mixed media. “The department always supported me through my many changes and they allowed me to just become myself,” said Rebel. The artist suggested that people should try new things and to escape their comfort zone. “If you’re not making mistakes than you’re not learning,” Rebel advised.

Fragmented will be displayed in the Contemporary Gallery, which is located within the Center for Art and Theatre. The exhibition will run from from March 17-28th  with a reception being held on Friday, March 28th.