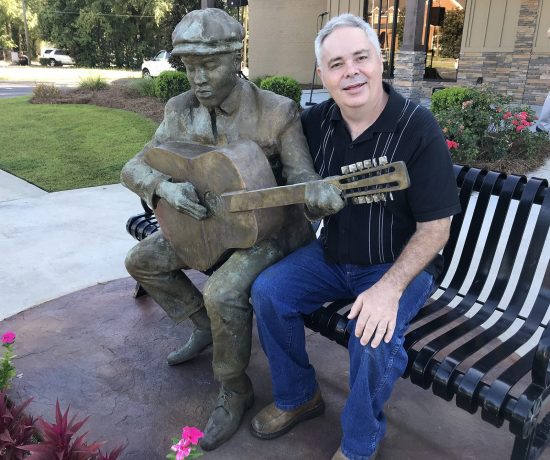 William Samuel McTell may have lost his sight during childhood, but that didn’t stop him from becoming one of the most influential blues musicians of his time — and a local hero. While his impact on Statesboro is evident all over town, his likeness has finally been immortalized with a bronze statue created by Georgia Southern University art professor Marc Moulton, M.F.A.

McTell was born in Thomson, Georgia, in the late 1800s, and he learned to play the guitar after moving to Statesboro, where he lived until his mother died in the 1920s. He learned the standard six-string guitar first, but he eventually began to play the 12-string exclusively.

Soon after his mother’s death, McTell moved to Atlanta and became a professional musician. He would then play music across the country before his death in 1959.

In 1928, McTell recorded his most famous song, “Statesboro Blues” for Victor Records in Atlanta. The song’s popularity exploded after The Allman Brothers Band covered it in 1971, and people still visit Statesboro because of the song.

Bob Mikell, member of the Blue Mile Committee, said McTell was a perfect choice for the first step in honoring Statesboro’s cultural and historic past through the arts and the Statesboro Stars program, which honors Statesboro’s biggest and brightest figures through art.

“McTell embodies the cultural and historic past of Statesboro,” Mikell said. “He composed ‘Statesboro Blues’ and grew up around the Blue Mile, so there was a great connection there. He is famous in the music community, and he was a good start to the Statesboro Stars.”

Mikell, who was also part of the team that secured the funding for the statue, was the head volunteer on the committee that chose Moulton to sculpt the statue. He said the goal for the project originally was to bring Georgia Southern and the Statesboro community together symbolically and literally to honor a Statesboro icon.

“Marc is a very talented sculptor who was from Georgia Southern and in Statesboro and could work with us, so it was a no brainer,” Mikell said. “We wanted to find someone from (Georgia) Southern to make the sculpture of a community leader, which furthers our mission of bringing the two together.”

The statue, which is made of cast bronze, depicts McTell sitting while playing his 12-string guitar. Moulton said the statue shows McTell in his natural state.

“McTell usually sat while he played, so it was determined early on that the purpose was to have an object that people could sit or stand around and have a photo taken,” Moulton said. “Putting it on a bench made the most sense.”

In April 2017, Statesboro was awarded $1 million after being named one of America’s Best Communities. Part of the winnings was used to buy the supplies needed to make the McTell statue.

The statue was in development for around a year and eight months. Moulton, who also created the sculpture in front of the Center for Art and Theater on the Statesboro Campus, said the statue is based on a photograph of McTell.

“There weren’t many photographs (of McTell) available,” Moulton said. “The statue took about a year’s worth of work to create. It’s approximately life-sized, based on the photo we used.”

The statue will serve as a symbol for Statesboro and the song that made the town famous for years to come, and Mikell said other Statesboro heroes will be honored artistically within the Statesboro Stars project. For now, however, McTell serves as the lead symbol for the community’s storied past and its passion for teamwork.

“It was a long process, so to see McTell there with his guitar as I drive by every day is a reminder of what this community and university can do when we work together,” he said.