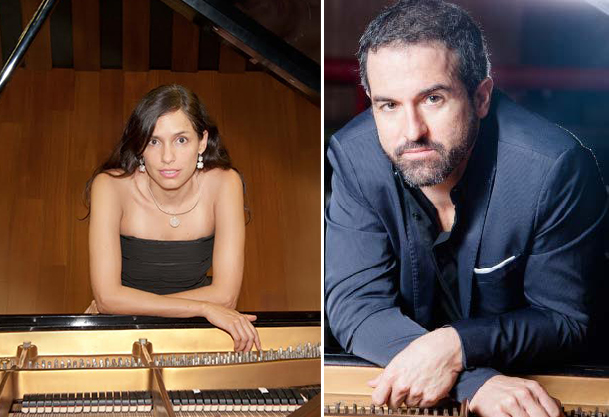 In the last century, the piano has become popular in Colombia as the country’s music is increasingly influenced by European traditions. Two of Colombia’s most versatile pianists are coming to the Georgia Southern University Armstrong Campus for Piano in the Arts’ South American Rhythms.

Ana Maria Orduz, D.M.A., and Diego Arango Toro, D.M.A., professors at the University of Antioquia in Colombia, will perform a variety of music by South American composers, from classical Latin works to tangos and miniatures for four-hands piano, which involves two people playing on the same piano.

“Exposing students to new music and different sounds from other countries is extremely important to build a strong foundation for their musical choices,”  Benjamin Warsaw, D.M.A., assistant professor and Piano in the Arts founder said. “Orduz and Toro have a unique talent in that they can connect to the audience and also teach students in a very proficient and wonderful way.”

The duo will perform Oct. 12 at 7:30 p.m. at the Fine Arts Auditorium on the Armstrong Campus.

Tickets are $15.00 for general admission and discounts are available for students, seniors and members of the military. Group rates are available. Contact the box at 912-478-5379 or visit georgiasouthern.edu/armstrongtickets to purchase tickets. Georgia Southern students, faculty and staff may attend for free.

Piano in the Arts, an exciting concert series now in its fifth season on the Armstrong Campus, is dedicated to showcasing the versatility of the piano through producing a series of unique concerts that incorporate many genres of music.

Ranging from classical and jazz to the American songbook, Piano in the Arts is devoted to providing world-class concert performances as well as learning opportunities for students outside of the traditional classroom. In addition to performing concerts, many of the pianists and guest artists will also instruct a master class, which is free and open to the public.