The Masquers bring ‘The 39 Steps’ to Georgia Southern Armstrong Campus 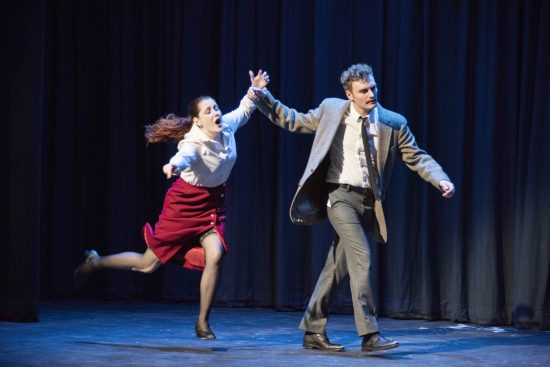 The 39 Steps, a combination of a spy thriller and a physical comedy, will keep audiences laughing Aug. 23 and 24 at 7:30 p.m. at the Jenkins Hall Mainstage Theatre on the Georgia Southern University Armstrong Campus.

“The 39 Steps,” directed by associate professor of theatre, Peter Mellen, Ph.D., features a cast of nine students and four student crew members, also known as The Masquers, who spent their summer rehearsing and building the show.

“The rehearsal process was a delight,” Mellen said. “Working with such a talented group of students on such a wonderfully weird and wacky show made the summer fly by.”

Mix a Hitchcock masterpiece with a juicy spy novel, add a dash of Monty Python and you have The 39 Steps, a fast-paced whodunit for anyone who loves the magic of theatre. The two-time Tony and Drama Desk Award-winning show is packed with nonstop laughs, more than 150 zany characters, an onstage plane crash, handcuffs, missing fingers and even some romance.

Mellen said he is excited to share the play with more audiences.

“The audience that saw the production this summer had a great time, and we are very excited to be able to share this bit of mystery and madness with students as we return to classes,” he said.

The Masquers is a student theatre troupe whose mission is to produce a season of plays each year to enlighten and entertain the Armstrong Campus and the Savannah community.

Tickets are $12 for general admission, with discounts available for military, seniors and children. Tickets are free for Georgia Southern students, faculty and staff. Tickets can be purchased by calling 912-344-2801, visiting GeorgiaSouthern.edu/armstrongtickets or by visiting the Fine Arts Box Office in the Fine Arts Hall, open weekdays from noon to 3 p.m.