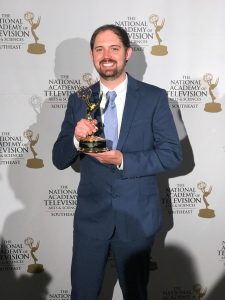 Jim O’Donnell, a 2012 communication arts graduate, received the Emmy for Director in a Newscast for his work as news director at WTOC in Savannah.

“I wouldn’t have been able to get to where I am without the supportive people in my life and without my knowledge gained from Georgia Southern,” O’Donnell said. “I was unsure what I wanted to do after graduation, but luckily the university set me up with an internship at WTOC, and I’ve been able to work my way through multiple job titles ever since.”

Directing coverage of a recent tornado in the Savannah area helped secure O’Donnell the award.

“There was a tornado that broke out in Garden City one day, and I put my iPhone behind me to record video of my directing,” he said. “I recorded my audio and recorded the 11 p.m. newscast that went out to our viewers. I couldn’t believe that I had made it to this level of achievement so early on in my career. 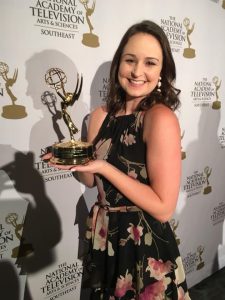 Kelly Krammes, a 2010 communication arts graduate, won an Emmy along with her coworkers at WXIA/WATL-TV in Atlanta for Special Event Coverage in the Edited category for “From Start to Finish,” which covered the Peachtree Road Race.

“Atlanta is home to the world’s largest 10K — the (Atlanta Journal Constitution) Peachtree Road Race,” Krammes said. “‘From Start to Finish’ was an exciting opportunity to tell the stories behind the runners, and I’m honored to have been a part of the team recognized by the National Academy of Television Arts & Sciences Southeast Chapter for sharing those stories.”

Two other communication arts graduates were nominated for awards.

2010 graduate Danielle Jones was nominated along with her colleagues at WIS-TV in Columbia, South Carolina, for the Newscast — Daily award for the WIS News at 7.

Bree Haggard, a 2014 graduate, was nominated along with her colleagues in the Journalistic Enterprise category for their work on “Todd Kohlhepp: A Killer Among Us” at WSPA-TV in Spartanburg, South Carolina.

The Department of Communication Arts is housed in the College of Arts and Humanities at Georgia Southern. The department offers degrees in theatre, communication studies, journalism, multimedia film and production and public relations.