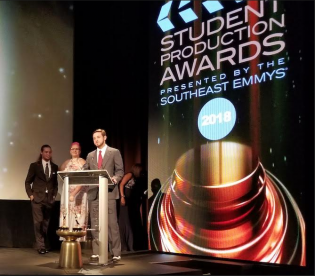 “I’m so excited to have received this honor,” said Galatas. “I never really thought this would be occurring in this stage of my career. This has been a team effort since we started.”

“Working at the MDC has provided me with an unsurpassed professional experience in the broadcast and video production field,” said Holder. “I have been presented with numerous opportunities to grow and augment my major of electrical engineering with this educational experience. I can’t thank Georgia Southern enough for this opportunity.”

“We are very proud of our students for winning these awards,” said Art Berger, director of the MDC.  “This year we’ve had many outstanding students who have worked very hard to achieve a true professional level with our live productions, and it has paid off for them. As a staff member at Georgia Southern University it is rewarding for me and all of our team to serve as mentors and to provide this once-in-a-lifetime opportunity, watching our students grow, graduate and obtain outstanding media industry jobs.”

The MDC, a division of University Advancement and External Affairs, provides students with media training and hands-on experience that they can then translate into real-world opportunities. Students run cameras, direct, produce and manage over 100 live events each year on ESPN3 and other national televised broadcasts.

The Regional Southeast EMMY Chapter is one of 19 chapters throughout the United States identifying and celebrating television excellence at the local and regional level of The National Academy of Television Arts & Sciences. This chapter represents television professionals from all disciplines of the industry and from each of its markets in Alabama, Georgia, Mississippi, South Carolina and North Carolina.