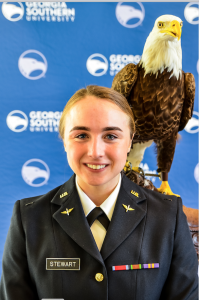 Madison Nicole Stewart, a Georgia Southern University Army ROTC leader and aspiring linguist from Senoia, Georgia, will proudly walk the commencement stage in Statesboro this weekend to earn dual diplomas in international studies and Arabic, as well as a minor in military science.

Stewart, who initially chose to attend Georgia Southern for its award-winning ROTC program, is grateful to the University for support of her educational and professional paths from day one.

“I have always wanted to become an Army Officer and Georgia Southern offered the best option to achieve that goal,” she said. “I was very fortunate to be awarded a three-and-a-half year scholarship from the school to attend.”

In her first year as a military science cadet, Stewart was introduced to Army customs and characteristics of the profession. She was also allowed the opportunity to have a small leadership role within her squad and attended Basic Camp at Fort Knox, Kentucky, which provided further leadership training.

By her second year, Stewart was bumped to a squad leader and the Cadet Association’s President, tasked with managing funds, fundraising and volunteer events for the Eagle Battalion. She and her team successfully organized the annual ROTC Blood Drive, conducted post-football game stadium clean-ups and hosted car wash fundraisers. She was also the only female competitor on a team of nine who participated in the grueling Brigade Ranger Challenge Competition, which pushes cadets through tough mental and physical challenges while encouraging the tenets of leadership and teamwork.

The following year, Stewart attended the Cultural Understanding and Language Program in Hungary, where she and a team of cadets taught English to the Hungarian Armed Forces with the mission to improve relations between the U.S. and Hungarian militaries.

“The ROTC Cultural Understanding and Language Program was an incredible opportunity for me not only as a future Army officer, but also as an international studies and language student,” noted Stewart. “It was an awesome experience and opened my eyes to the greater international military community, who, more often than not, work together hand-in-hand to preserve and protect peace efforts.”

She rounded out that year with a second-place Ranger Challenge win and completion of the ROTC Advanced Camp, a required month-long test on tactics, soldiering skills and leadership at Fort Knox.

Stewart’s final year has been the most demanding — and rewarding — as she served as the Eagle Battalion’s Command Sgt. Major, the most senior enlisted cadet who coordinates all training events, classes, labs and field training exercises, and sets and enforces standards. It was her distinct honor to work alongside the Battalion Commander, who attends Georgia Southern’s Armstrong Campus in Savannah.

“The Battalion Command split between two campuses required careful coordination through our leadership,” she said. “We were proud to bring the two campuses together through the ROTC program.”

Stewart, who earned placement on the President’s List with a 4.0. GPA each semester, three Platinum Eagle Awards for maintaining a perfect physical training score and garnered the Alumni Association Award in April, is most honored to leave her own special University legacy, as the Superior Cadet Decoration Award will be named in her honor from this year on.

On track to commission as a second lieutenant soon, Stewart is “beyond excited” to attend the U.S. Army Aviation Basic Officer Leader Course at Fort Rucker, Alabama, in June to complete flight school. It is her hope to fly UH-60 Black Hawks and attend the Defense Language Institute, which supports Army officers in learning a foreign language in the country of origin.

“Without the incredible support of my ROTC cadre and professors, and the amazing faculty of the international studies and Arabic departments, I would have never succeeded to the extent I have in ROTC, school and in life,” said Stewart. “I owe everything to the people who supported my efforts here.”