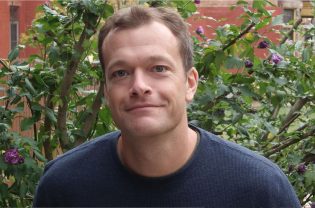 Georgia Southern University’s Armstrong Campus in Savannah will host a reading by acclaimed novelist Chris Bachelder, author of The Throwback Special, as part of its Spring 2018 Visiting Writers Series.

The event will take place on Thursday, March 1, at 7 p.m. at Foxy Loxy Café, located at 1919 Bull Street in Savannah, and is free and open to the public.

Named a 2016 National Book Award Finalist for fiction, The Throwback Special tells the story of 22 men who gather each fall to painstakingly reenact what ESPN dubbed “the most shocking play in NFL history:” the November 1985 play in which the Washington Redskins’ Joe Theismann sustained a career-ending compound fracture to the leg when sacked by Lawrence Taylor of the New York Giants.

“Through hosting poets and novelists who teach in creative writing graduate programs at universities in the southeast and beyond, the Visiting Writers Series exposes students to great writing while providing them the opportunity to interact with great writers to whose programs they might apply after graduation,” said Lecturer of English at Georgia Southern University’s Armstrong Campus and Director of the Visiting Writers Series William Belford, Ph.D. “Furthermore, in hosting the readings at a centrally located public venue, the series serves the local community and the campus community alike.”

Noted as “a heartbreaking and hysterically funny glimpse into the worried soul of the domesticated American male,” by the National Book Foundation, the New York Book Times Book Review called Bachelder’s novel “wistful and elegantly written.”

Winner of the Paris Review’s Terry Southern Prize for humor, Bachelder is author of three additional novels, Bear v. Shark, U.S.! and Abbott Awaits, and is a creative writing professor in the graduate program at the University of Cincinnati.

Additional support for the event is provided by the Department of Languages, Literature and Philosophy and Gail and Mickey Rountree, in memory of their son Rhett Morgan Rountree, as well as other patrons of the series.