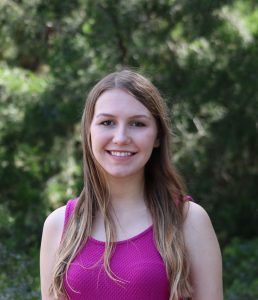 Georgia Southern University student Abigail Hey, an English major from Stem, North Carolina, has received a $4,000 scholarship from the Tau Sigma National Honor Society. Hey placed second out of more than 90 applicants representing chapters from across the nation.

The scholarship committee evaluated applicants based on their involvement in and service to the chapter, university, community and individual academic achievement.  As an academic honor society for transfer students, Tau Sigma National Honor Society promotes academic excellence, requiring students to maintain a minimum academic average of a 3.5, while staying  engaged on campus and in the chapter.

Georgia Southern staff members and the chapter’s co-advisors, Brittanie Blunt and Neal Richardson, selected Hey as the nominee to represent the chapter in the scholarship competition.

Hey attributes her success at Georgia Southern and opportunities such as presenting at the national conference to her participation and membership in the honor society. As an officer of campus outreach for Tau Sigma and member of Sigma Tau Delta and Phi Theta Kappa, she has helped new transfer students find their place and make long-lasting relationships. Hey stated this scholarship will help with upcoming costs as she finishes her bachelor’s degree and prepares to attend graduate school to complete a Master of Arts in English.