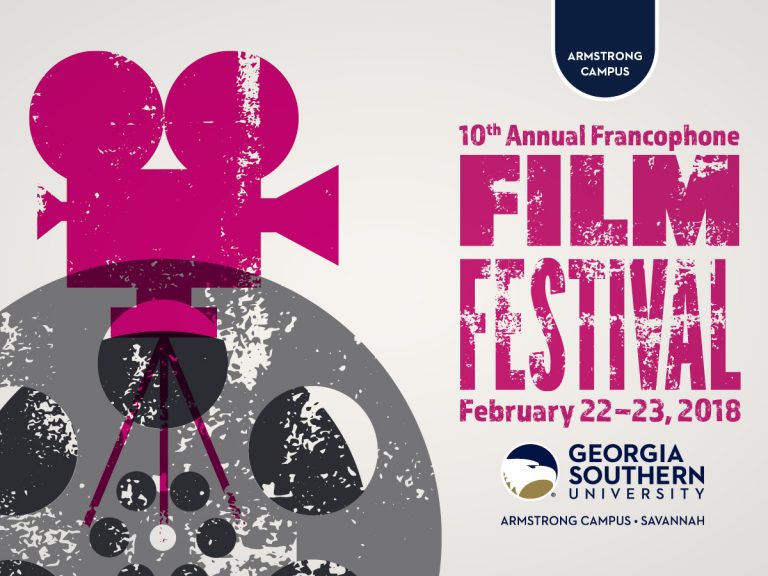 The community is encouraged to attend the 10th annual Francophone Film Festival Feb. 22-23 on the Georgia Southern University Armstrong Campus in Savannah.

The Armstrong French Club started this event in the spring of 2008 thanks to a grant provided by the French Embassy and the Tournées Festival, which aims to bring French cinema to American institutions.

“We read about the Tournées Festival grant over 10 years ago and wanted to spread our love for the French-speaking world: the different cultures, the different countries, the different accents,” said Director for the Office of International Programs and Services for the Armstrong Campus Dorothee Mertz-Weigel, Ph.D. “We wanted to make sure that people knew French was spoken outside of France, and that French speakers are on all five continents. We also wanted anyone who wanted to watch a more current French-speaking film to be able to do so, for free, because culture and the wish to travel to another country for the time of a film should be available to anyone, especially on a university campus.”

The festival will feature five films in French with English subtitles. This year, the films will be shown over the course of two days and include two matinees so students from local schools can attend.

“The festival has grown in the last 10 years and is an event that is now expected in the Savannah community,” said Mertz-Weigel. “It has been attended by past Armstrong presidents, by the Honorary Consul for France and Germany (Denis Blackburne), the French community of Savannah, as well as local French teachers and their students, among many others.”

The following films will be shown at the Ogeechee Theatre on the Armstrong Campus:

The Armstrong French Club, the Department of Languages, Literature and Philosophy, the Office of International Education and the College of Liberal Arts are sponsoring the event. The event is free and open to the public.