The Kenny Leon Fellowship, named after the Tony Award-winning Broadway director Kenny Leon, is given annually to an early-career theatre artist of color. As a recipient of the fellowship, Owolabi will have the opportunity to work as an assistant director and even direct some shows at the Alliance Theatre in Atlanta, where Leon previously served as the former artistic director.

As a student Owolabi worked on and off stage in the theatre program. She developed as a young director during her undergraduate program in major program productions such as “Metamorphosis” and her student one act “The Dutchman.” She was also involved with the productions of “Death of a Salesman,” “The Birds,” “Barefoot in the Park,” and “Joe Turner’s Come and Gone,” among others.

In addition to these shows, Owolabi also participated in the Kennedy Center American College Theatre Festival (KCACTF) Society of Stage Directors and Choreographers (SDC) fellowship. Through this program she was invited to Washington D.C. to participate in the National Festival as one of 10 students nationwide.

“It’s an amazing, life-changing opportunity at the biggest theatre in Atlanta, which has already given me so many opportunities to direct, and work with renowned directors from across the U.S.,” said Owolabi. “I feel very blessed to be the fellow. It’s an amazing feeling to do what you love, and even more amazing when you’re encouraged to do it.”

According to Owolabi’s former professor Lisa Abbott, associate chair of the Department of Communication Arts, it’s no surprise Owolabi was selected for the Kenny Leon Fellowship.

“This is a very high profile fellowship and is a great example of how successful our students are in the professional industry,” said Abbott. “The Theatre and Performance program at Georgia Southern is a generalist program that helps students develop an overall competency in theatre while giving them the freedom to select specific courses that help identify their focus. For Ibi this included faculty recognizing her potential as a director, creating specific opportunities for her to learn the craft and practice it, and guiding her toward internships, conferences and other outside programs that would help her post graduation.”

Owolabi credits her time at Georgia Southern for much of her success as a young director.

“I can definitely say with full confidence that the things I learned at Georgia Southern gave me a great head start in my field,” said Owolabi. “When I was in school, I learned the technical parts of theatre as a whole and directing, but I also learned how to be present in a room, how to be collaborative with my fellow technicians and how to analyze a script down to it’s bones.

“I also was introduced to the Kennedy Center American College Theatre Festival through my school, and with guidance from Lisa [Abbott],and great actors from our program, went on to the nationals in Washington [D.C.], and got invited back the year after for a playwright intensive,” she added. “That festival put me in contact with Freddie Ashley, who is the artistic director of Actor’s Express in Atlanta, which started my career there after graduation.” 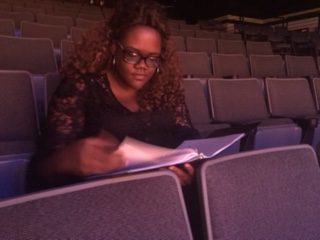 “I love developing that collaborative atmosphere with my creative team and my actors,” said Owolabi. “I love the discoveries made in the text when everyone is focused on making the play live. And mostly, I love that I’m still learning.”