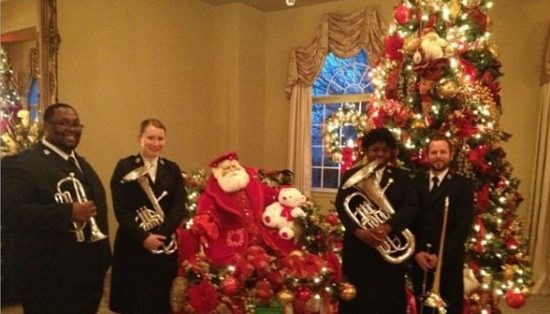 For some, picking up an instrument as a child is a hobby at best. For alumna and future Double Eagle Osibodu “Tito” Oluwatito (‘14), though, playing her first baritone at the Salvation Army became a lifelong gift that kept giving.

Tito and her older brother, Michael, attended music camps at the Salvation Army every summer in her youth. She recalls growing up surrounded by others who loved music and ministry, and she was inspired by their programs.

“When I was younger, I longed to teach at the camps, and I did eventually start teaching there on staff until about two years ago,” said Tito. “I was a housekeeper and laundress at first and eventually moved up to an instructor, then camp counselor where I really fell in love with teaching and being involved with young people. I was given my first instrument, and it changed my life. I wanted to do the same for someone else.”

Tito’s passion for service and music carried over into her experiences at Georgia Southern, as she continued to volunteer with the Salvation Army, even recruiting her fellow music students to work with her there. She also joined sororities at the University and served her Department of Music.

“In addition to her professional drive to become a fine musician, she served the department on more than one fraternal service organization,” said Richard Mason, DMA, one of Tito’s favorite instructors. “She held offices in Tau Beta Sigma and Sigma Alpha Iota, both of which provide immeasurable service to the department. Off campus, Tito was extremely active in the Salvation Army. She frequently did mission trips abroad while maintaining her studies at home.”

Not only did Tito travel to Turks and Caicos and South Africa for music with the Salvation Army, but she also had the chance to share her love of music through a study abroad trip with the University. In 2011, Tito and other University music students played concerts in Budapest, Germany and Austria.

“That’s the thing about music. It’s universal. It’s one of those things that transcends time and nationality. It unifies everyone, and I love that,” said Tito.

Upon graduating from the University with a bachelors in music education in 2014, Tito provided youth ministry for the Savannah Salvation Army. After a year of working there, she was offered a graduate assistantship for the University’s marching band and could not pass up the opportunity to further her education. She packed up and headed back to Statesboro.

“At first I did not want to go to graduate school at all, but two of my favorite professors Dr. McKenzie and Dr. Dunham sat me down and had a long conversation with me that inspired me to continue my education,” she said. “They both pushed me to try to be the best musician I could be. Returning to the University was the best decision for me.”

Tito currently works as the graduate assistant for the Southern Pride Marching Band. She coordinates logistics for rehearsals, concerts and travel arrangements for the Band.

“Since her acceptance into the graduate program, Tito has been an important contributor to the overall success of our concert and athletic bands,” said Mason. “She oversees several logistical concerns that are imperative in running such a large program. Simultaneously, she is gaining the knowledge, technical skill, and superior musicianship to become a fine band conductor.
I’m very proud of her accomplishments to date, and look forward to hearing about the great accomplishments that are still to come.”

Tito will earn her Master’s in music in May. After graduation, she plans to work as a music educator for middle school grades in hopes of sharing her passion to help others embrace the art.

“Music has given me my purpose, and now I’m able to give back,” she said.