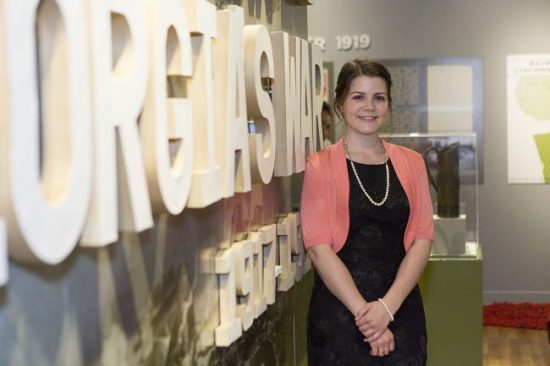 A pressed rose lays across a handwritten letter from soldier Joe Hollingsworth. “There is something still alive so near the trenches, even the gas has not touched it,” the letter reads.

Heart-wrenching letters like Hollingsworth’s, decorated war helmets and medals of valor are among the dozens of artifacts in Georgia Southern Museum’s latest exhibit, “The World’s War is Georgia’s War, 1917-1919.” The exhibit commemorates the 100th anniversary of the United States’ involvement in the First World War through the experience of Georgia.

Graduate student Brittany Sealey curated and coordinated the exhibit as part of her non-thesis project. She spent countless nights researching, writing text, compiling images and piecing together the artifacts that would tell the story of the impact of WWI on Georgians.

“We wanted to do something to commemorate the anniversary, but we didn’t want it to be like every other exhibit in the country,” said Sealey. “I wanted to focus on Georgia’s role in the war. I wanted to share the unique stories of our state.”

Brent Tharp, Ph.D., director of the Museum, held an open house in 2016 for members of the community to share their artifacts and to learn more about them. Many of these pieces were donated or put on loan to the Museum for this specific exhibit.

“An important part of this project has been the community’s role in helping to curate this exhibit,” said Tharp. “The captivating stories of their families as told by the artifacts they preserved has made the statewide story very local and personal. The Museum greatly appreciates their willingness to lend, and in many cases donate, cherished artifacts for all to see and better understand this period of history and its impact.”

Sealey could not contain her excitement while describing the pieces on display.

“The Barnes [family] loaned us the decorated war helmet; Virginia Anne Waters and Bobby Benson loaned us the French Croix de Gurre certificate and medal from Dr. Edward Lane Moore, for whom local Pitt Moore Road is named after; the Jones family lent us the ‘Spirit of the American Doughboy’ candlesticks from their relative James “Lonnie” Jones, former mayor of Metter, and so on,” explained Sealey. “We couldn’t have put this together without the community coming together to share their history.”

Sealey developed a plan to share these stories and reached out to undergraduate students to help bring the idea to life.

“This entire exhibit was very much student-developed in every phase,” said Sealey. “Graphic design students developed the color scheme, created the panels, did the printing and made the props. Theatre students built a life-sized replica of a WWI trench. One fellow graduate student, Nathan Flanders, developed an interactive game to illustrate trench warfare, and other graduate student, LynDee Winterton, worked on educational programming for the exhibit.”

Sealey encourages the Georgia Southern and Statesboro communities to come enjoy this exhibit at the Museum to truly see the connection their state had to the First World War.

“The great part about this exhibit, is people can look at these pieces and say, ‘Wow that’s my hometown,’” said Sealey. “This is the best part for me as a historian- seeing the public enjoy the stories we’ve collected and having them get involved in our work.”

For more information on the Museum, visit GeorgiaSouthern.edu/museum.