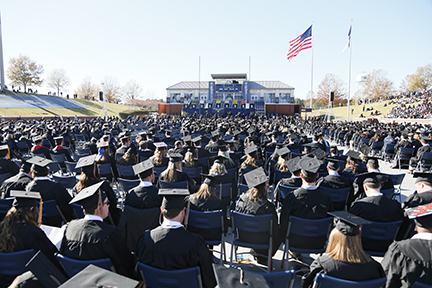 “Graduates, I extend to you my personal congratulations on your academic success,” said Hebert. “Your University salutes you on your success and sends you off soaring on wings of eagles.”

Outstanding Georgia Southern alumnus Mike Royal served as the guest speaker for this year’s ceremony. Royal is the chairman of the Georgia State Board of Education, and has served on this board since 2012, when he was first appointed by Gov. Nathan Deal. He also serves on the Board of Advisors to the University’s College of Education, and is the the founder of Partners Risk Services – a fast-growing risk management and insurance firm with offices in Georgia and Colorado.

Royal encouraged the graduates to keep an optimistic mindset for their future and the choices they make in life.

“One of biggest choices you have ahead of you right now is what to do next,” Royal continued. “And just like many of you here today, I was not sure what my dream job was, and if that’s you right now, if you’re not sure what your big ‘why’ is in life, that’s fine. Many successful people take years or even decades to find that.”

He also reminded graduates that life is full of uncertainty, and not to let that, or fear, get in the way of accomplishing their goals.