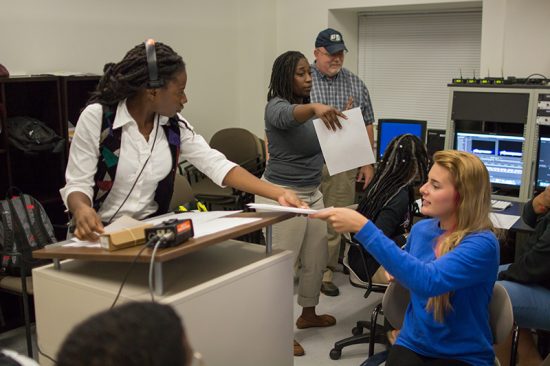 While Americans were on the edge of their seats throughout the presidential election evening, Georgia Southern University Communication Arts students were broadcasting live, debating and providing breaking news to the community the entire night.

“We began, as professors, planning for this since last semester, so this has been a long time coming,” said Jennifer Kowalewski, Ph.D., assistant professor. “Students have worked hard all semester learning about the issues and who they will see on the ballot. They have worked hard to bring this to fruition.”

This coverage required dozens of students and faculty and months of hard work and preparation. Several classes were involved in the coverage, including the Political Communication, Online Journalism, Multimedia Application and Media Production courses.

Tyson Davis, media production instructor, shared the value of working with his students to make this semester-long project happen.

“It is important for the students to have this opportunity, because it is the most realistic newsroom experience they will likely encounter in a class,” said Davis. “The nature of a live newscast, especially one that features breaking news coverage along with live interviews, cannot be properly reproduced without enmeshing students in the literal professional environment. With live election night coverage, we are able to do just that.”

Ristomatti Lanne, senior multimedia film production manager, acted as a producer and reporter for the event.

“The election time is definitely the best time to be a journalist, and [election] night proved that to be true,” said Lanne. “Yes, you are very busy throughout the night, especially when you have such a close race like we had, but I liked it.”

University faculty acted as experts in the coverage offering expert opinion on the effects of everything from comedy to religion on the election. Student leaders, including the president of the GS Association of College Republicans, Chase Davis, also weighed in on the coverage.

“Covering the election at the University is important because people our age are going to be as large a voting block as the Baby Boomers, so we need to be engaged,” said Davis, senior. “Also, as a journalism student, it helps get us used to what we’ll be doing for a living.”

Rashida Otunba, senior multimedia journalism major, was one of two Communication Arts students given the opportunity to act as an election stinger for the Associated Press throughout the evening.

“This was an amazing experience,” said Otunba. “It not only gave me a huge appreciation for the community, but it also increased my love of my major even more. Although it was tiring, and I had to be there until late at night, working election night was a really exciting time.”

Overall, the coverage was a success in the eyes of the students and faculty. Kowalewski says the department plans to continue with the election coverage tradition in years to come.

“I feel the students really learned how to cover elections, saw how time-consuming and utterly unpredictable elections can be,” said Kowalewski. “They kept on task throughout the evening, keeping everyone informed. They left the night having an appreciation for the field they have chosen, learning how difficult but rewarding this career can be.”