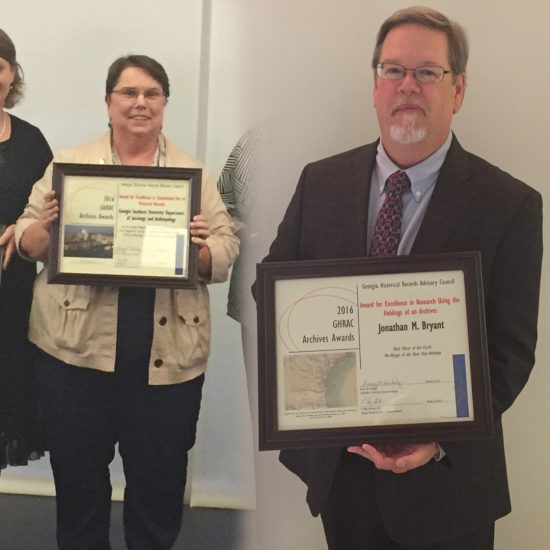 Bryant, Professor of History, received the Award for Excellence in Research Using the Holdings of Archives for his award-winning book Dark Places of the Earth: The Voyage of the Slave Ship Antelope (W. W. Norton, 2015).

Bryant’s book covers the case of the slave ship Antelope, her commandeering by a privateer, and the ensuing legal trial that reached the United States Supreme Court in 1825. The book is the fifth for Bryant and was a finalist for the Los Angeles Times Book Prize in History.

Moore, Professor Emerita in the Dept. of Sociology and Anthropology, along with the City of Savannah Research Library and Municipal Archives, the Dept. of Sociology and Anthropology, and the Shinhoster Youth Leadership Institute received the Award for Excellence in the Educational Use of Historical Records for “The Cluskey Embankment Stores Project, 2011-2016: Civic Engagement and Youth Leadership Development through History, Archaeology, Preservation, and Interpretation.”

The Cluskey project was a partnership between the City of Savannah, Georgia Southern University, and the Shinhoster Youth Leadership Institute and sought to explore and provide new understanding on the Cluskey Vaults. The project found more than 6,700 artifacts during excavation and presented its findings during a press conference with the Mayor Pro Tem of Savannah, Carol Bell.

GHRAC works to promote the educational use of Georgia’s documentary heritage and to support efforts to improve the condition of records statewide.  The Board is charged with advising the Chancellor and the Georgia Archives on records and policy issues.  For more information, please visit www.GeorgiaArchives.org and click on Partners, then click on Georgia Historical Records Advisory Council (GHRAC).

Nominations for the 2017 Awards will be accepted beginning February 1, 2017, and they must be postmarked by June 1, 2017. More information is available from the Georgia Archives website.

The Georgia Archives is a unit of the Board of Regents of the University System of Georgia and identifies, collects, manages, preserves, and publicizes records and information of Georgia and its people and assists state and local government agencies with their records management. This work is done within the framework of the USG’s mission to create a more highly educated Georgia.