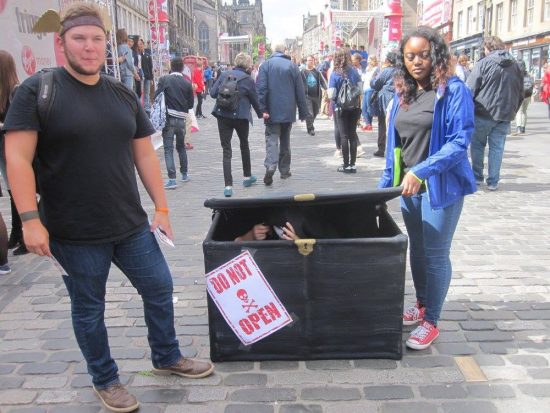 This August, thirteen Georgia Southern University students and faculty member, Lisa Abbott, took their production of “Do Not Open,” a student devised piece, to the International Fringe Festival in Edinburgh, Scotland. The show was nominated for the Fringe Sustainable Practice Award based on a review of the content of the show and responses to a questionnaire.

“Do Not Open” dealt with the idea that the opening of Pandora’s box was not necessarily a bad thing, and that the duality of elements creates a world where the good can be appreciated but only in context with the bad, and that understanding can be reached through the experience of both.

Abbott said, “Politically relevant, the students who created the piece continued to add and change it based on the events of our world right up to the week prior to leaving for Edinburgh.”

“Do Not Open” was performed in the Space Venue four times during the first week of the Fringe to good houses and was well received by the audiences. One performance included a talk-back discussion with high school and college students on the work of devised theatre and the process by which the show was created.

“One of the things we heard most about our show,” according to Abbott, “was how it so clearly addressed the issues facing not just the U.S. but the world, and raised the questions without answering them, leaving audiences with the need to discuss what they saw.”

Students created “Do Not Open,” through a Devised Theatre course. Devised Theatre allows students to create a concept and test it out through improvisation, leading to a script and production which may be adapted throughout the performances.

“This experience not only allowed students to create theatre as an ensemble, but perform it before an international audience, which made them have to be aware of how the United States is viewed by the larger world. We explored the challenge of satire in this piece and the balance between humor and pathos,” said Abbott.

“The work on devised theatre is empowering as a director because the job becomes one of guiding the creative process from the very beginning. I was impressed with the way the students tackled the work.”

In addition to their own performances, students also were able to take in more than 50 other performances.
Abbott also noted that through the Fringe, she connected with faculty and performers from around the globe and engaged in great conversations about the state of theatre and the power of theatre.

The Fringe Festival originated in 1947 in an effort to support world peace. At the time, eight uninvited theatre companies performed on the outskirts of the festival, and were so popular with audiences that it led to the Edinburgh Festival Fringe now hosting over 3,000 international productions.

To be nominated and considered for the Sustainability Award, means the production was viewed as meeting good practices in terms of what the Fringe terms a “’triple bottom line’ which considers the environmental, social and financial sustainability of a project or entity.”