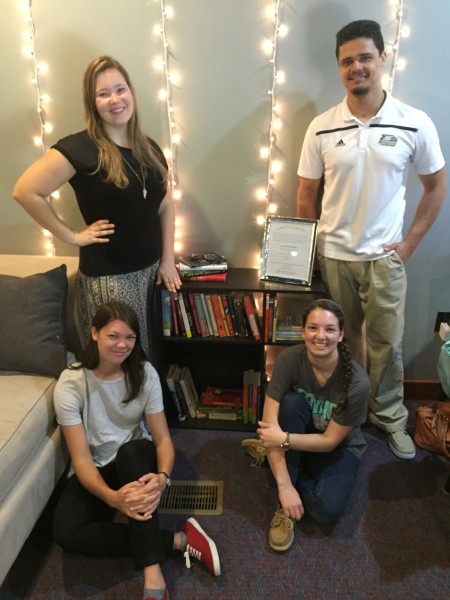 A Little Free Library provides easy and free access to books in a self-serve location either in an outside box or inside a business, zoo, school, etc. Little Free Libraries run off a take-a-book-leave-a-book system.

The project started as a way for Todd Bol to honor his mother. Bol’s mother was a school teacher and loved to read books. He built a scale model of one-room schoolhouse and posted it along with books in his front yard.

Bol partnered with Rick Brooks, Outreach Program Manager at the University of Wisconsin, to co-found the Little Free Library. Brooks saw Bol’s project to spread reading through a box of books in his neighbourhood and thought it would be the perfect project to partner on. The program spread to Madison, Wis., home of the University of Wisconsin, in 2010 and garnered national attention in 2011. In 2016 over 36,000 Little Free Libraries have sprung up across the United States.

Lydia Biggs, President of the Georgia Southern chapter of Sigma Tau Delta, was taking suggestions for a community service project for the spring semester when one of their members brought to their attention the Little Free Library project.

“In the past we have done projects such as reading in the after school programs for kids in the local elementary schools, and we have donated books to the women and children’s center and the local prisons to help start their libraries back up. This year we focused on the Little Free Library project. We were approached with it by one of our members, and she said we should look into it. We thought it would be a great project,” Biggs said.

Little Free Libraries are located in “Places such as dog parks, random squares down in Savannah, and all up and down the coast which is great,” Biggs said. 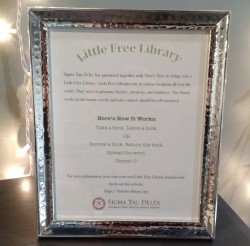 In order to start up their Little Free Library, they made what they thought was a simple plan.

“In theory it was going to be simple. People donate books, get bookshelf and put it in the store, and you are done. That was the plan. Like they say the best laid plans often go awry, but that is ok,” Biggs said.

Step one, the book drive.

The book drive started off slow, and the deadline was looming. The chapter had to make a decision and decided to extend the book drive. They hoped that with more time the word would spread and spread it did. Not only did they get enough books to open up Sigma Tau Delta’s Little Free Library but ended up with enough books to open a second one. They plan to place this one on campus.

“We organized a book drive and opened it up to students and faculty. We had a very good response. It was really exciting,” Kenley Alligood said.

“We started out by doing the book drive. That started off a bit slower, so we extended the book drive out a little bit. I am so glad that we did. We had lots of students from outside the department [of Literature and Philosophy]. We had some [Department of] Music people come and donate books. Colin McKenzie, D.M.A., Associate Professor and Director of Athletic Bands, donated some books. It was a good thing that happened, and we now have enough books to do two Little Free Libraries,” Biggs said.

In order to entice people to donate books, the chapter started a raffle where for each book you donated, you got a ticket which gave you a chance to win one of assorted prizes such as tickets to a play and a gift card to Three Tree Coffee Roasters.

Now that they had the books to open a Little Free Library. Next they just needed a location for it. Their choice was a new local student hangout, Three Tree Coffee Roasters.

“I knew the owners pretty well and talked with them before. Since it just opened, I knew it was a hotspot for students and that they have been getting a lot of publicity. I thought it would be a good place for a Little Free Library,” Amanda Gilbert, Co-President and Treasurer. “In the top of their coffee shop, they have an area they call the Treehouse. It is a really relaxing area. We figured people would be likely to pick up a book and read it there.”

The book drive was not their only challenge though. Next came the bookshelf.

“We were working with Three Tree to find out what kind of shelf they wanted. We sent them several options, and they picked one. We ordered it, and the website lied to us,” Biggs said.

“In the picture it came up to about waist high. That would have been perfect, but it was taller than me. It was six feet tall. We got to Three Tree and when we pulled the thing out of the car Phillip, the guy we had been working with at Three Tree, was like I don’t know if that is going to fit. It ended up not fitting, but the store took it back. We got a different bookshelf which ended up being the best possibility. It looked really unique and different and fit with the vibe Three Tree had,” Biggs said.

“From there we registered the library with the organization, and we actually just found out that Mary A. Villenponteux, Ph.D., Chair of the Department of Literature and Philosophy, received the plaque. Before graduation we will put the plaque on the bookshelf. The plaque gives us a Little Free Library ID number, and if people are familiar with Little Free Libraries, they can search on the website, and that one at Three Tree will pop up,” Gilbert said.

The Little Free Library is already a hit though.

“I took my mom to go see Three Tree recently. We went up stairs, and I noticed that some books have been taken and some new books are in their place. So I was like yes, people are listening, and some others have been moved around so clearly people have at least been looking at them,” Biggs said.

The chapter is excited for what the Little Free Library will do.

“In today’s age and time everyone is attached to their phones. Libraries themselves are suffering because everyone says it takes too much time; they never have books I want. If you put it into the community, we felt like it would make people be like oh hey this a cool book, and it would be worth it for them to take it, and even if they don’t bring it back to the library, they might pass it off to a friend or something. It is at least giving more literary material in people’s hands,” Biggs said.

Gilbert sees the project as “a really sustainable project. Most people throw out old books. I like that the little Libraries are really creative. People decorate them unique ways. I think it promotes creativity as well.”