Comerford will travel to Yale in the fall to continue her research project. 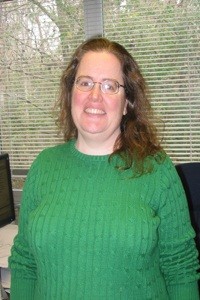 The project is a comparative study of libraries in colleges administered by the Society of Jesus – the Jesuits – in the sixteenth and seventeenth centuries.

“The Society is an order of priests with an illustrious history of missions and education, but their bookholding practices have not been studied in depth.,” said Comerford.

The Beinecke Rare Book and Manuscript Library holds at least seven books that once resided in European Jesuit Colleges in the 16th and 17th centuries which will help further her understanding of how the books were used by the Jesuits.

“One of the most difficult issues in progressing from lists of books is determining how those books were used, and understanding that depends on tracking down the physical texts which were held by these libraries. The Jesuits were suppressed between 1772 and 1814, which means that their libraries were scattered via purchases, donations, and theft,” Comerford said. “The Beinecke Library also houses multiple sources for the study of other early modern European libraries and a large collection of works on European Jesuit history.”

She has already traveled to Europe to research Jesuit libraries in Spain, the Netherlands, and England. She also plans to visit libraries in Belgium this summer.

Her plan is to publish this study in a full-length book.