Le nozze di Figaro to Open at the PAC 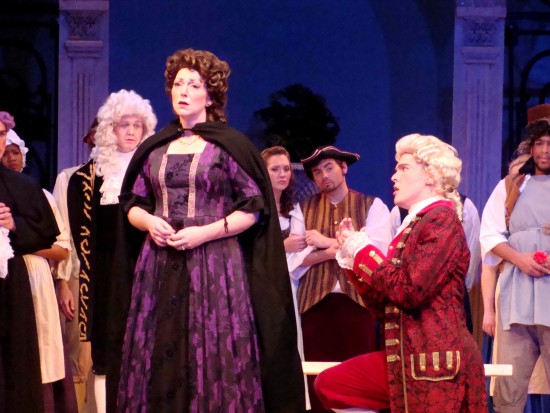 The most frequently performed Mozart opera, Le nozze di Figaro, is comprised of some of the most beloved music of all time.

Georgia Southern Opera director Arikka Gregory has led a student cast and orchestra in months of preparation for this masterful score.

Meanwhile, she has been working to provide the students and their audience with the trappings of a large opera house theatre experience. “We have rented an enormous set,” said Gregory. “It arrived on a 53′ semi and took 10 hours and almost 30 people for us to unload and assemble, but it is worth it because the end result is really quite stunning.”

Gregory’s students are excited to have this opportunity to participate in such a huge project. Junior Choral Music Education major Travius Burch feels “truly blessed to be apart of a cast that is so vastly different, but strongly dedicated to each other and the music. I feel like we feed off of each other’s energy on stage, and it’s so much fun!”

This is Maestro Adrian Gnam’s first collaboration with Georgia Southern Opera, which makes the event even more special.