College of Arts and Humanities
Home > Music > From Georgia Southern to Hollywood, An Eagle Finds His Tune

From Georgia Southern to Hollywood, An Eagle Finds His Tune 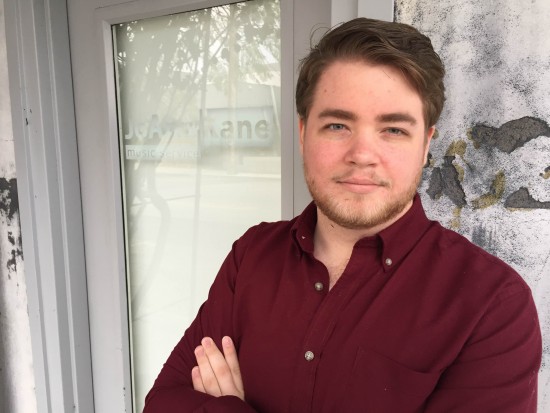 From Statesboro to Los Angeles, a Bachelor of Music degree in composition has taken one Eagle from the East Coast to the West Coast and given him a start in the film and television industry. The next time you go to a movie theater and watch the latest blockbuster or turn on the television for the latest new series, you might just be watching something in which an Eagle had a part.

Department of Music alumnus Dalton Daniel left his friends and family behind after graduating in 2015 and packed all of his possessions into a Uhaul truck for a cross-country journey. He was headed to Los Angeles to take an internship with JoAnn Kane Music Service and to attend graduate school.

In a short time though, Daniel accepted a full-time role as a music copyist with the largest music preparation company in Los Angeles and has already helped prepare music for movies and television shows like the Zoolander 2, Empire, The Simpsons, The Huntsman: Winter War, and Big Friendly Giant.

A large part of his work takes place in the digital world and on a computer. Like a number of other professions, music has been impacted by the advancements in technology, and the preparation of scores has become an almost digital affair.

“Some of the older guys still use pencil and paper to compose, but we mostly work with MIDI. but Technology has really changed the way film music is made. Pencil and paper have almost been taken out of the equation completely. Most modern composers like Alexandre Desplat send us a Digital Performer file, and all the music is in there as raw MIDI data, along with audio files of sequenced orchestral instruments. We then create a score by extracting the MIDI data and referencing the audio files, and the copyists use these scored to create parts. The parts are then sent to the proofers, printed, taped, and bound for the session,” Daniel said.

To do this Daniel uses one of two programs – Finale or Sibelius. Both programs help digitize the scorewriting process. He learned how to use these programs at Georgia Southern University thanks to the encouragement of one of his professors.

“My composition professor, Dr. Gendelman, really stressed to all of us composers to learn how to use notation programs and get acquainted with them because how can you produce a modern score without knowing the ins and outs. It is kind of like having Microsoft Word and not knowing how to change fonts or put an indent in a paragraph,” Daniel said.

Daniel described choosing Georgia Southern as “probably one of the best decisions I could have made. It prepared me for this job in almost every aspect.”

Daniel started at Georgia Southern by making a few of arrangements for the Southern Pride Marching Band for fun.

“That really got taught me what musicians like and don’t like to see on their paper as far as notation,” Daniel said.

He also started arranging for his brass quintet.

“It was nice because we were all friends, and I could go in and ask does this part work for you and what doesn’t work for you compositionally? That part of it really helped me become more intimate with other instruments other than my own,” Daniel said.

He also praised his former trombone professor, Rick Mason, D.M.A., for helping prepare him as a musician and for a career in the film and television industry. Mason was a studio trombonist in Los Angeles for more than 10 years.

“He was really good about teaching me how to think musically for myself. All of these things together really helped prepare me for this job,” Daniel said.

Daniel always wanted to write music for the film and television industry but did not know about companies like JoAnn Kane Music Service.

“I found out about it, got on board, started doing some of this work, and I actually really enjoy doing it. It is a lot of fun, and I get to see all the music that is going into all these big movies. I get to see how it is all done, and I get to learn how the greats do it,” Daniel said.

He originally took a job with the company as an intern and had no guarantee of a full-time position. Daniel took the risk of leaving his home state of Georgia and crossing the country anyway and prepared a back-up plan of graduate school just in case.

“It was probably the hardest thing I have done in my life so far. When I moved out here, I literally didn’t know a soul. I got all my stuff and put it in a Uhaul truck. My parents helped me move out here, and the only thing that was guaranteed was grad school and a roof over my head,” Daniel said.

“It was tough to leave all my friends and family back in Georgia, but we still keep in touch. It took me a few months to really settle into it. I am from Perry which is a small town in middle Georgia. To go from Perry to Statesboro to Los Angeles was tough but every single day has been worth it,” Daniel said.