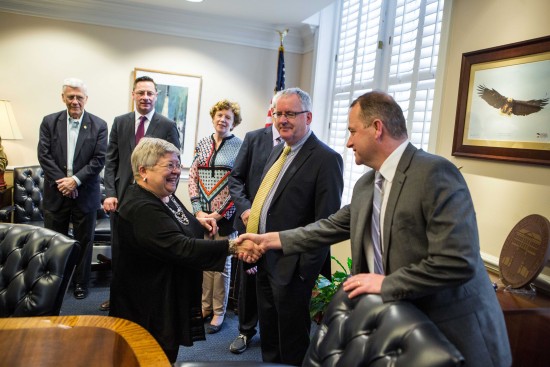 Last week a group of Irish government officials met with leaders across the state of Georgia including interim Georgia Southern University President Jean Bartels, Ph.D., RN, thanks to work of the Wexford-Savannah Axis Research Project, which is a partnership between the Center for Irish Research and Teaching (CIRT) and Waterford Institute of Technology.

The delegation met with the mayors of Atlanta and Savannah, toured historic Irish sites in Savannah and the Georgia Southern campus, and met with local business leaders before taking in the St. Patrick’s Day Parade.

Wexford is the most southeastern of Ireland’s traditional 32 counties, and it is the most represented county-of-origin among Savannah’s important Irish community.

Inaugurated almost exactly two years ago, the Wexford-Savannah Axis Research Project has (among other things) involved almost 40 students in primary-source archival research, generated over $38,000 in grant funding, and excited significant interest among the Savannah community and throughout Ireland.

As a direct result of the contributions that the Wexford-Savannah Axis Research Project has made to Savannah’s knowledge and appreciation of its heritage, CIRT Director Howard Keeley was honored to be one of two keynote speakers at the 900-guest, black-tie 204th Anniversary Banquet of the Hibernian Society of Savannah, the city’s oldest and most prestigious Irish organization. Prior keynote speakers at the event have included two sitting Presidents of the United States.

On Monday, April 11, at 7 p.m. in the Nessmith-Lane auditorium, CIRT will host its Fifth Annual Distinguished Lecture in Irish Studies. The speaker will be Patricia Harty, Founder-Editor of Irish-America Magazine, the premier publication in Irish America.