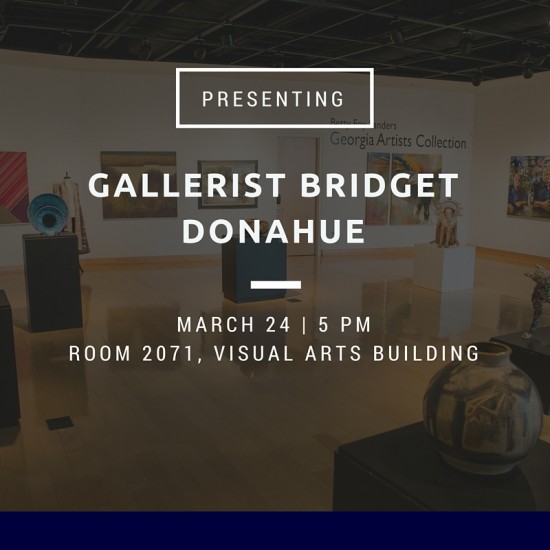 Donahue is a co-founder of the innovative DIY Brooklyn gallery space Cleopatra’s, and was gallery director at D’Amelio Terras Gallery and Gavin Brown’s Enterprise. In 2015 Donahue opened her own gallery in Manhattan’s Lower East Side, Bridget Donahue Gallery, which made a number of “Best of 2015” lists from such publications as the New York Times and Art in America magazine. With expertise that ranges from 2D painting, 3D sculpture and installation, new media work and more, Donahue will be at Georgia Southern to discuss the state of the contemporary art world, and ways emerging artists can navigate its complexities.

“I’m very much looking forward to Bridget’s visit to the Betty Foy Sanders Department of Art,” notes Gallery Director Jason Hoelscher. “Her passion for art, her knowledge of the art world at both a national and international scale, and her sharp eye will contribute immensely to our students’ experience this semester, and to their big-picture understanding of what they are doing as artists.”

Donahue’s lecture will begin at 5 p.m. in Visual Arts Building, room 2071. The event is free and the public is invited to attend.