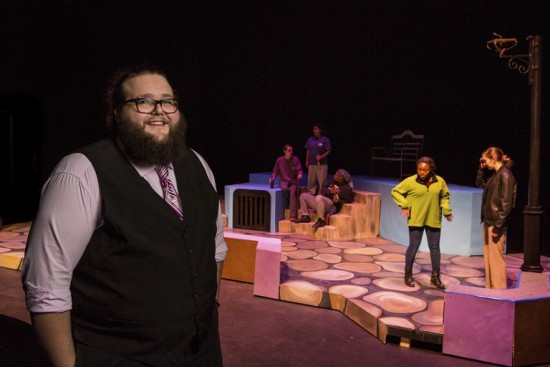 If you’d met Gage Crook four years ago, you would have met an aspiring pediatric orthopedic surgeon. The young man developed a hip problem earlier in life, and was encouraged by his family to enter the medical field using his health as inspiration. Crook spent much of his freshman year in lectures and labs, but he began to realize the stage interested him more than the microscope.

Crook was “bitten by the theatre bug” early on in high school, but hadn’t considered the field his main area of study until arriving at college. After spending time in the Georgia Southern theatre program, however, he began to find his true calling.

“Medicine was my family’s dream,” said Crook, “not mine.”

Throughout his time at the University, Crook acted, directed and helped behind the scenes with many school plays. His professors inspired and encouraged him, and he quickly developed a passion for turning text into a “living, breathing thing.”

“Directing is the best drug I’ve ever found,” he said.

Crook quickly became a stage manager for the department, and by his junior year, he became the season production stage manager. This duty entails serving as a mentor and adviser to the other student stage managers.

“A stage manager is at every rehearsal, writes down all blocking, cues, prop and costume notes, sends out daily rehearsal reports, coordinates costume fittings with actors, and calls the light, sound, media and set cues in the production,” said Lisa Abbott, associate professor of theatre. “They are one of the most crucial and often unsung heroes of theatre.”

Crook’s peers selected him to be the director for the student production of “The Complete Works of William Shakespeare, Abridged,” and he was even nominated for a directing intensive award for his direction of a ten-minute play at the regional Kennedy Center/American College Theatre Festival (KCACTF).

“Gage was an excellent student in our directing course, completed an advanced directing class that is held at the invitation of the professor, and has pursued directing opportunities in the community,” said Sarah McCarroll, Ph.D., assistant professor of costume design and theatre history. “There’s an obvious commitment to getting practice in his craft.”

In addition to his successes as season production stage manager and his recognition at KCACTF, Crook has been recognized for directing a show for the Averitt Stars at the Averitt Center for the Arts’ Emma Kelly Theatre and has served other roles such as properties designer, actor and assistant director. When the opportunity to direct a full-length Shakespearean play arose, Crook was instantly nominated for this role.

“His passion for directing and his pursuit of his goals has been reflected in the work he has been doing not only here on campus but in our community as well,” said Abbott. “Gage has certainly earned this opportunity and we constantly look for ways to give our students the opportunity to work in the area of their passion. One of the strengths of our program is that we help our students practice their art and build their resumes on and off stage.”

Though Crook graduated in December, Abbott noted he was chosen to direct the mainstage play as a student, which has only happened one other time in her eight years at Georgia Southern.

A play of this magnitude undoubtedly comes with challenges, and Crook says he is up for the task.

“This is a huge undertaking for me because it is both the largest show and the first full-length Shakespearean play I have directed,” he said. “Dealing with a cast this large and also taking on the staging of a Shakespearean comedy takes a huge amount of work and preparation on my part, but I’m very excited to be taking on such a large endeavor!”

“Twelfth Night” is a classic Shakespearean comedy centered around love and mistaken identities. The play follows lovesick Orsino as he sends his servant Cesario (who is actually the maiden Viola in disguise) to plead on his behalf for the heart of the indifferent Olivia. Meanwhile, an alliance of servants and hangers-on fight a battle of wits against the high-handedness of the pompous Malvolio.

The show is one of the four mainstage productions of the Theatre and Performance program for the 2015-2016 season that gets full funding, technical and design support. Crook, a self-proclaimed organic director, has been working closely with actors and the stage manager for months, and rehearsals have grown more intensive as the show approaches.

The upcoming production introduces new faces to the Georgia Southern stage with debut performances by Michelle Daly as Viola, Ryan Shell as Orsino, Michael Adedeji as Toby Belch, and Daja Holmes as Olivia. Returning to the stage are audience favorites Whitakter Gardner as Malvolio, and Tori Townes as Feste.

“I want the actors to have an opportunity to discover things themselves,” he said. “I don’t plan out every detail. I like to see what everyone can bring to the table, mix that with my vision and let everything come together. It’s very much about the journey.”

After the final performance of “Twelfth Night,” Crook plans to move back to his native Oklahoma to look for internships and eventually go on to graduate school to earn a Master of Fine Arts in directing. He looks forward to discovering what the theatre has in store for him in the years to come.

Crook has nothing but standing ovations in his future, and he won’t soon forget his roots that helped him to that place.

“I believe in the ability of theatre to impact change,” he said. “Students that have graduated before me have left a legacy for us, and I’ve seen lots of opportunities come up. I would like to think I’m leaving a legacy myself. This department has given me so much, and I’d love to think I’ve given something back.”

“Twelfth Night” opens on Thursday, March 3 and runs through Saturday, March 5 at the University’s Performing Arts Center. All shows are family friendly and a great theatre experience for young children. Each of the three performances begin at 7:30 p.m.

Student and youth tickets are $6. Faculty, staff and community tickets are $12. For group prices, contact the box office for more information.  All seating is general admission.

For more information on the performances, visit https://cah.georgiasouthern.edu/cat/season/.