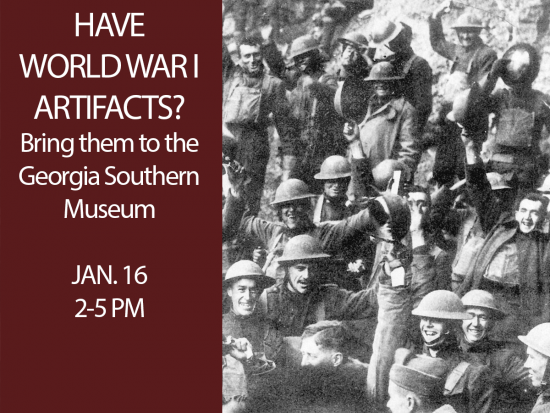 Georgia Southern’s faculty and Museum curators ask that Georgians bring any artifacts, documents, photos or stories to share as they seek to learn more about the experiences of Georgia’s soldiers, the importance of training camps and war industries in the state, and the experiences of those on the homefront. They will be on hand to provide more information on the items.

The Museum is located at 2142 Southern Drive in the Rosenwald Building on the campus of Georgia Southern University. For questions or more information, contact Brent Tharp, Ph.D., at 912-478-5444.

The College of Liberal Arts and Social Sciences (CLASS) is the largest of the eight colleges that make up Georgia Southern University, and it plays a central role in every student’s core of knowledge. CLASS, also described as the University’s College of the Creative Mind, prepares students to achieve academic excellence, develop their analytical skills, enhance their creativity and embrace their responsibilities as citizens of their communities, their nations and the world. CLASS offers more than 20 undergraduate degrees and several interdisciplinary minors from its 11 departments and five academic centers. CLASS offers eight master’s degrees, two graduate certificates and one doctoral degree. For more information, visit GeorgiaSouthern.edu/CLASS.