Southern Pride serves food, music to those in need 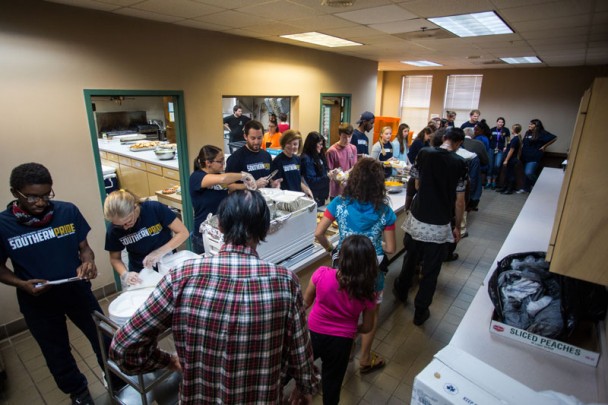 On a rare Saturday when they weren’t marching onto the field at a Georgia Southern football game, members of Southern Pride, the University marching band, were serving food to those in need in Statesboro.

Twenty-five students from Southern Pride volunteered at the Soup Kitchen at Statesboro First United Methodist Church, where they served some 150 people meals and entertained them with a few rousing music numbers as they dined.

The effort was just one part of “Southern Pride Stepping Out,” a community outreach initiative started by Colin McKenzie, D.M.A., assistant professor of Music and director of Athletic Bands, who wanted to give the students a chance to engage their community while attending Georgia Southern.

Sara Melford, director of the Soup Kitchen, says the effort is certainly worthwhile. A chemistry professor at DePaul University for 35 years before moving to Statesboro, Melford and other volunteers coordinate both helpers and food for each weekly Soup Kitchen, and appreciate all the help they can get. And while the service provides meals for those who need them, the helpers get just as much out of the transaction.

“You get a good feeling because you know you’re doing good, and you see how much these people enjoy coming,” she said. “This is their chance to have their special meal of the week.”

Southern Pride members helped prepare food, hauled dinner plates to the Statesboro Summit Apartments for the elderly, and then served dinner to attendants. Rachel Jones, a sophomore accounting major and saxophone player with Southern Pride, said the experience was a fulfilling one.

“I’m really glad I got to do this today,” she said. “I enjoy working with people and serving people, and this was a great chance to do that.”

Karen Phipps, a middle-school teacher and volunteer at the Soup Kitchen for the last six years, says the help is appreciated.

“I was so excited to see that [Southern Pride] truck,” she said. “I love to see others getting involved.”

Phipps has volunteered every weekend for the last six years, missing only a few weeks after suffering debilitating health problems and the loss of her husband shortly after her recovery. She dedicates herself to the work now not only because she doesn’t sit still for very long — lightly bouncing against the counter as she says this — but also because she likes to give back.

“So many of these people don’t feel like real people because they’re coming here for a meal they don’t normally get,” she said. “They’re no better or worse than me. Life just dealt me a better hand than them this year. Next year, I could be in line. You never know. They so totally appreciate being treated as normal.”

McKenzie says Southern Pride will continue to look for service projects in the area, and will be serving with Habitat for Humanity in the Spring.