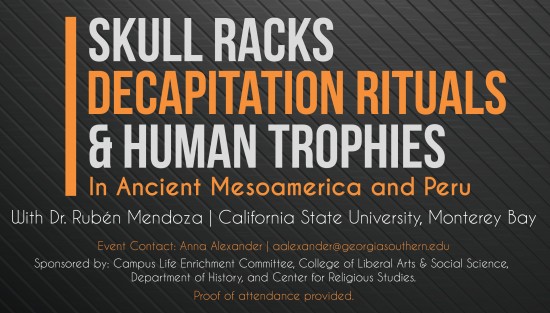 Dr. Mendoza will discuss the technologies of terror identified with the Mesoamerican and Andean practice of human trophy taking and skull racks.

Dr. Mendoza holds a Ph.D. and a M.A. in Anthropology from the University of Arizona and a B.A. in Anthropology/History from the California State University, Bakersfield. He has explored the length and breadth of Mexico, Central America, Europe, and the Southwest, documenting both pre-Columbian and Colonial era sites and collections.

The lecture is sponsored by the Campus Life Enrichment Committee, College of Liberal Arts and Social Sciences, Department of History, and the Center for Religious Studies.