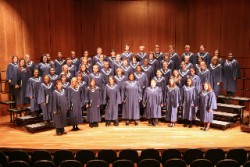 The choirs of Georgia Southern University will present a concert of American folk songs, hymn arrangements and spirituals, including works by composers such as Aaron Copland, Alice Parker, and Mack Wilberg on Friday, March 8, at 7:30 p.m. in University’s Carol A. Carter Recital Hall. The concert will feature the University Singers and Southern Chorale conducted by Shannon Jeffreys, D.M., director of choral activities, and will be broadcast live via GeorgiaSouthern.TV.

“The program will have a familiar feeling through recognizable tunes and musical styles,” said Jeffreys. “The University Singers have really connected with their music and are excited to share these works.”

Southern Chorale and the Fermata the Blue chamber ensemble are preparing to participate in the fourth Linz Anton Bruckner International Choral Competition and Festival in Austria this summer. The Chorale will compete in both compulsory and sacred music divisions while Fermata the Blue is competing in the vocal chamber category. The students will also present a friendship concert at St. Florian’s Basilica and join with other Festival participants in a performance of Bruckner’s Te Deum. Following the competition, the Chorale will continue on an educational and performance tour of Italy that includes singing in service at the Vatican.

Though admission to the March 8 concert is free, attendees will have the opportunity to purchase tickets for various items that the choirs are raffling to support their summer tour abroad. The raffle items include a spa package from Serenity Day Spa, a guitar from Pladd Dot Music, an overnight stay at a Holiday Inn Express in Savannah, a Merle Norman makeup kit, a repurposed frame and chalkboard, a Chick-fil-a nugget platter, and one dozen cupcakes from Simply Sweet Bakery. For more information about the concert or the Chorale’s funding needs, contact Jeffreys at csjeffreys@georgiasouthern.edu or 912.478.2319.