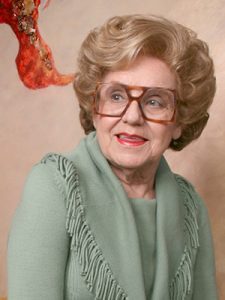 As a child, Betty Foy Sanders had a passion for drawing.

“I loved to draw, and my mother made it a point for me to have dance, music, and art lessons,” said the avid painter and self-described “homegrown” Statesboro, Ga., native.

“You never know as a young child what you are going to be when you grow up,” said Sanders, whose paintings are found in museums, corporations, and private collections around the South, including the Georgia Governor’s Mansion.

Though Sanders is certainly well known for her accomplishments, she is equally recognized for her devotion to the advancement of the Arts and art education.

For more than 50 years, Sanders has fostered her love of learning for art students at Georgia Southern. When her husband, former Georgia Gov. Carl Sanders was in office from 1963-67, she dedicated her efforts toward the construction of several Fine Arts buildings in the University System of Georgia. One of those was the Foy Fine Arts Building on Georgia Southern’s campus, named for her father, J.P. Foy.

In 1967, Sanders established the Betty Foy Sanders Georgia Artists Collection, which features the works of accomplished Georgia artists. Sanders continues to curate the collection which is on permanent display at the Center for Art & Theatre on Georgia Southern’s Statesboro Campus.

Her commitment to Georgia Southern has touched many: donations of paintings and sculptures from her own personal collections, generous academic scholarships, student travel scholarships and an art bus to transport students to exhibitions, artists’ studios and other sites for creative inspiration.

“I have always wanted to help students,” she said.

A lasting tribute to Sanders’ steadfast support is the visual arts department that bears her name – the Betty Foy Sanders Department of Art.

Sanders views her donations as a way of giving back to the University that has meant so much to her personally.

“There’s something about Georgia Southern. This is an opportunity for me to educate, instruct and direct future generations,” Sanders said. 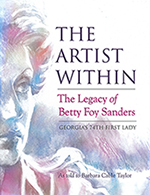 An accomplished artist, Sanders’ paintings exemplify color mastery and an intense investigation of nature. Often using actual elements of the earth in her paintings – minerals, stones, rocks and geodes – she adds depth, texture and an intense connection to the earth and the history that lies within. Sanders’ paintings reflect her deep devotion to her home state of Georgia, and to its rich history and remarkable beauty. Recognizing her talents, she received the Artist Certificate of Excellence by Georgia Gov. Joe Frank Harris, and was featured in the PBS program State of the Arts. Georgia Southern proudly exhibits a selection of Sanders’ paintings representing substantial works and periods from the artist’s career.