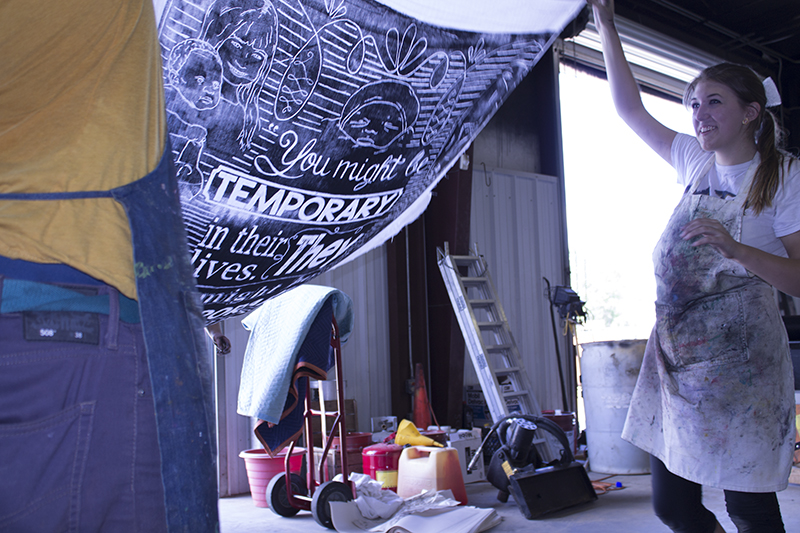 STATESBORO, Ga. – Betty Foy Sanders Department of Art student Allison Mueller is gearing up to introduce printmaking to the community in a big way—using a steamroller—during this year’s ArtsFest on April 23 from 10 a.m. – 4 p.m. on Sweetheart Circle at Georgia Southern University.

Southern Steam Prints is the first event of its kind at Georgia Southern. For this event, Mueller issued a call to artists to design and carve, 4-foot-by-4-foot and 4-foot-by-8-foot wood relief blocks. On the day of the festival, the blocks will be linked together, inked, and printed by driving over the blocks with a BOMAG steamroller, provided by Southern Rental Systems. 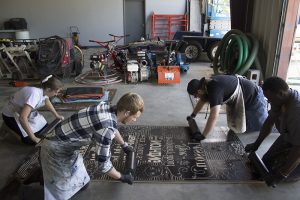 The theme for the inaugural Southern Steam Prints event is History—local, national and personal. So far, five blocks have been selected for printing. Work from local art students at the Charter Conservatory, professional and student artists are among those to be printed.

“When people outside of the art community think of art, they usually think of painting, drawing and color pencil. Most have never heard of printmaking,” said Mueller. “But for me printmaking is one of the most interesting, process-heavy ways to create art.” 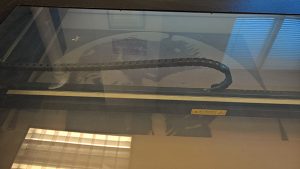 To speed her carving process, Allison Mueller, reached out to Georgia Southern’s engineering department. Using a laser cutting machine, the larger sections of her relief were created by the machine allowing her to focus more energy hand-carving the more intricate details.

To give festivalgoers a hands-on opportunity to learn the printmaking process, Mueller has worked with professor Trish Carter, fellow art students, and Statesboro-Bulloch County Parks and Recreation to develop and organize two other Print Zone ArtStops for the festival. So not only will visitors have a chance to become involved in the process of creating the large-scale prints with Southern Steam Prints, they also will have the opportunity to pull handmade paper and create monoprints. Visitors also will have an opportunity to purchase handmade prints and books created by students in the BFSDoArt Print & Paper Society at the festival’s Artist Market.

Mueller is a senior B.F.A. 2D Studio major from Milton, Ga. The Print Zone/Southern Steam Prints event is part of her honors thesis project which focuses on educating the public on the historic, image-making process of printmaking.

The College of Liberal Arts and Social Sciences (CLASS) is the largest of the eight colleges that make up Georgia Southern University, and it plays a central role in every student’s core of knowledge. CLASS, also described as the University’s College of the Creative Mind, prepares students to achieve academic excellence, develop their analytical skills, enhance their creativity and embrace their responsibilities as citizens of their communities, their nations and the world. CLASS offers more than 20 undergraduate degrees and several interdisciplinary minors from its 11 departments and five academic centers. CLASS offers eight master’s degrees, two graduate certificates and one doctoral degree.  For more information, visit class.georgiasouthern.edu.