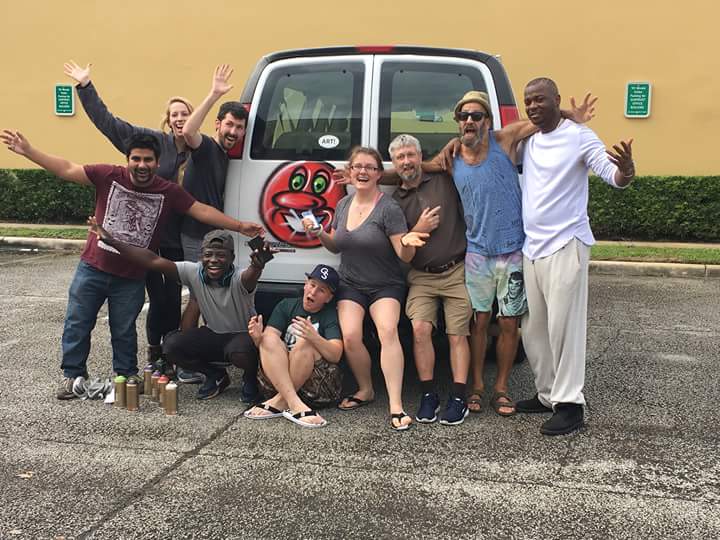 STATESBORO, Ga., Dec. 19, 2015 — In early December, nine Master of Fine Arts (M.F.A.)  graduate candidates fromthe Betty Foy Sanders Department of Art (BFSDoArt) drove to Miami, Florida, for Art Basel Miami Beach, a large international art fair that connects artists, gallerists and collectors from around the globe. They returned with a greater understanding of the art world, and a department van which is now itself a work of art.

Each year, Art Basel shows significant work from the masters of Modern and Contemporary art as well as work from emerging artists. There are sculptures, paintings, installations, photographs, films, large-scale artworks, films and performances. 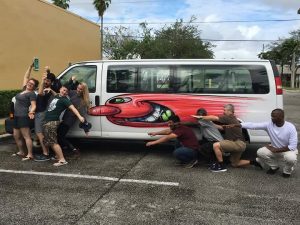 Gallery Director and Professor Jason Hoelscher, M.F.A., and the students attended Basel and several other art fairs including Ink, Aqua, Untitled, Scope, Pulse and NADA. In all, they took in about 600 galleries worth of exhibitions.

“They all seem to have had their minds suitably blown,” Hoelscher said. “It was a great opportunity for us to introduce them to the great, wide world of art. I think it helped them to understand what they can do in the real world once they complete their M.F.A.”

The group also had an opportunity to meet well-known, Los Angeles artist Kenny Scharf and see him in action.

A few weeks before the trip to Miami, M.F.A. candidate Courtney Ryan learned about Scharf’s work during a class. She mentioned him in an Instagram post, he responded, and they began corresponding. 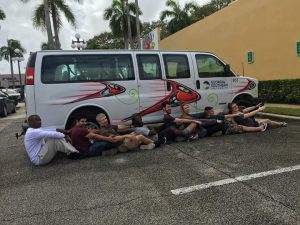 “He does these things he calls ‘Karbombz’,” Ryan said. “For him, they’re a way to bring smiles to the roads, so if people are stuck in traffic and getting angry, well then they have something fun to look at.”

When Ryan learned Scharf would have pieces presented at Art Basel and would be in Miami working on a mural, she asked if he would be interested in painting a Karbombz on the “Betty Bus,” a van donated to the BFSDoArt by benefactor and former First Lady of Georgia, Betty Foy Sanders.

He agreed and the students met him during their final day in Miami. He took a break from the mural to paint the van.

“He was asking us questions about the bus and how it worked,” Ryan said. “When he asked what color we wanted our Yikies, we showed him Betty’s picture and told him she has these amazing red glasses. So all of the faces painted on the bus are red to represent her glasses.”

Scharf, posted this to Instagram: kennyscharf The nicest MFA students from Georgia Southern University drove down in their “Betty Bus” to ArtBasel and got a Vanbombz! before heading back north.

This trip and others like it are made possible by The Betty Foy Sanders Student Travel Fund. The BFSDoArt is committed to offering quality undergraduate and graduate degree programs that prepare students to become professional artists, designers, art historians and creative leaders.