The Betty Foy Sanders Department of Art has the great pleasure of recognizing Whitney Reddish as the 2014 Eagle Nation on Parade scholarship recipient. 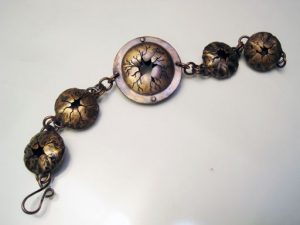 Reddish is a BFA student focusing on 3D design. Her dedication to art and academics has been recognized through her election to president of the Jewelry Guild and the Dean’s List. Beyond the classroom, Reddish participates in the National Society of Leadership and Success, Jewelry Guild, Club Mud, Student Made, and the Student Art League. After her graduation in the Fall of 2014, she plans on applying to graduate programs to earn her MFA in small metals.

Eagle Nation on Parade is a public art project that salutes the University’s traditions, celebrates the unity of campus and community, and contributes to the economic vitality and quality of life in Statesboro. This scholarship was established by the BFSDoART to support the outstanding achievements of students majoring in the visual arts who are passionate about public art. The Eagle Nation sculptures are perched all over the boro, and many designed by our own—Kim Riner, Scott Foxx, Stephanie Neal, Kristina Hall, Wesley Stewart and Colleen Beyer.

In order to win a BFSDoArt Scholarship and/or award, students submitted an application and portfolio, eligibility also required a 3.0 grade point average or above.