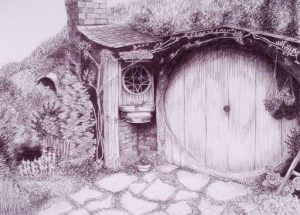 This year’s 2nd Place BFSDoArt Award and Robert J. Focht Memorial Drawing Award went to Emily Oren. Currently residing in Statesboro, GA, Oren  is a member of the Phi Eta Sigma Honor Society and has been on the President’s List for her academic accomplishments. Oren is currently earning her BFA in 2D studio art. In addition to art, Oren enjoys spending her time climbing the rock wall at the RAC.  Although her future plans are undetermined, art and creativity have remained central in her academic pursuits.

A native of Georgia and Bulloch County, Mrs. Sanders began her college career at Georgia Southern. A distinguished artist and advocate for the visual arts in Georgia, Mrs. Sanders’ ambition is to guarantee that the visual arts remain vital at Georgia Southern. She achieves this by ensuring that art students receive the support and recognition necessary for their creative development. Through their generous endowment and continued giving, Former Governor Carl and Mrs. Sanders have provided these four substantial undergraduate awards and so much more.

Endowed by the Focht family to honor Robert J. Focht’s memory, this award supports a student with exemplary accomplishments in drawing, which was the passion of student Robert Focht. This award is presented to students who show a continued love for art, demonstrating creativity, sensitivity, and excellence in drawing media.

In order to win a BFSDoArt Scholarship and/or award, students submitted an application and portfolio, eligibility also required a 3.0 grade point average or above.