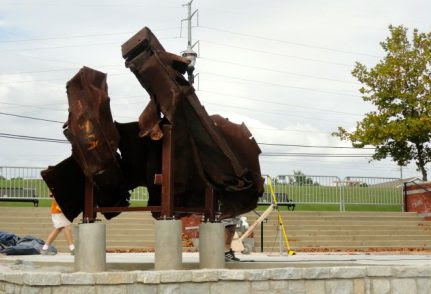 One of Suwanee’s most iconic figures has been returned to the city and is being prepared for permanent display.

The 9/11 artifact that has been dubbed Remembrance is now resting on a base in Town Center Park, after having been in storage and to Georgia Southern University since its original arrival.

The 1,600 pound piece of steel from one of the destroyed World Trade Center towers originally arrived from New York in 2011. It was formally dedicated in September 2011, and for awhile was placed in front of City Hall.

Work is still in progress. The display will have a base about 30 feet in diameter, and it will be fashioned like a sundial. The base is expected to contain a timeline of events as they unfolded on September 11, 2001.

A dedication for the new display is scheduled for September 11, 2013.