Editor’s Note: This article appeared on ArtsATL’s website on June 1, 2013. 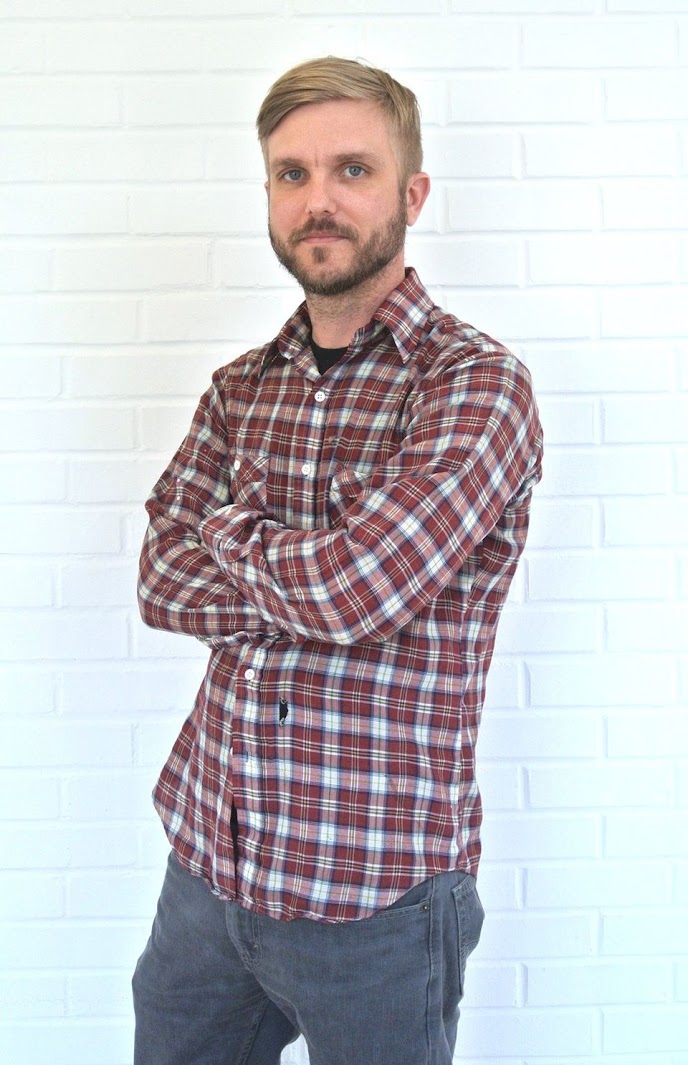 Derek Larson’s freestanding video sculptures and paintings don’t blur the boundaries of the digital and the handmade so much as toss them together. What results is something of a handmade pixel.

For the past two years, Larson has been making digital animations that are projected onto shaped wooden “screens.” Like theater scenery flats, they are propped up with wooden braces and secured with sandbags. The video and screens are conceived as a single, symbiotic piece.

With genre-bending dexterity, the artist, a professor at Georgia Southern University in Statesboro, approaches his video sculptures like a painter. Even when he uses figures or cultural references, he is primarily concerned with formal decisions about color and space.

The videos are a mash-up of found footage and animation — the Starbucks logo, Garfield the cat, Hegel the philosopher, dripping colors, television, music, architecture, fountains, patterns, designs — that he edits in After Effects, Cinema 4D, Flash and Premiere. They usually reflect things he’s looking at or reading at the time — that familiar barrage of images and information that we all filter through every day. Going for the immediate “wow” factor as well as prolonged appreciation, Larson describes much of his imagery as “psychedelic and trippy” and “peaceful and meditative.”

The Seattle native, 35,  earned an MFA at Yale University in 2007, where he studied with the like-minded Jessica Stockholder, whose colorful trans-media assemblages have been described as painterly sculptures and three-dimensional paintings. Philip Guston is Larson’s favorite painter, admired for his abstract figuration, for that inherent contradiction. Larson also cites as significant recent paintings by Laura Owens, which merge analog and digital aesthetics.

Larson’s paintings are intensely colorful, glowing, minimalist compositions on wooden panels. The artist, 34, lately finds himself “in a ’60s state of mind,” borrowing the visual language of minimalists Dan Flavin and Donald Judd. The panels have blocks of color, whether from tissue paper or casts of geometric shapes.

Ten years ago Larson was painting in the dark, so to speak. He would paint light bulbs to color the light and hang them next to his canvases, effectively throwing off his entire palette. “Turning on the light was an exciting reveal,” he says.

His recent paintings are something of a return to that, though this time he’s attaching fluorescent lights directly to the surfaces, which serve as both illumination and design element. Their vibrant glow creates Rothko-esque fields of color that bump up against minimalist geometry, sometimes in the form of Hydrocal casts of gridded or repeating cellular forms: a chocolate bar, a honeycomb pattern, plaid and houndstooth designs. Some of these were on view at an exhibition in May at Cave gallery in Detroit.

So Larson’s paintings sport pixel-like forms and illuminate themselves like video, and the videos become like painting in their imagery and sometime drippiness, and the sculptural screens are part of the videos, which are to be shown only on the screens in order to give the videos an objecthood like painting or sculpture.

This interconnected, mutually dependent system takes on weightier meaning with Larson’s new series “Nervous Systems,” which will be shown at the Hudgens Center. The artist has had Crohn’s disease for 17 years and reluctantly just started taking Humira, a drug used to treat inflammatory conditions. These circumstances have caused him to reflect on our immune systems as they relate to our increasingly altered environment and our state of “nervous existence.” The series touches on health, bodies, immune systems, genetically modified foods, computer processing and pharmaceuticals.

With its personal subject matter, “Nervous Systems” may prove to be more thematically driven than Larson’s other works, and more holistic still.