CHILDREN FOR SALE:  TARGETING THE SEX TRADE IN THE UNITED STATES

“How can design change the world?”  That was the problem posed to 6 graduate graphic design students from the Betty Foy Sanders Department of Art at Georgia Southern University – Ashley Clement, Herman Dawson, Tori Ivey Stephanie Arends Neal, Collin Smith and Lindsay Byrnside Tyson.  Their answer, and resulting response, was overwhelmingly effective.  “This question, while broad and ambitious, is entirely achievable if one pushes themselves beyond what they think they know,” says graphic design professor, Leigh C. Thomson, “The students exceeded my expectations with their efforts.”

In a collaborative effort during the Fall 2009 semester, the students, who named themselves “The Wide-Eyed Project”, investigated several social issues concerning American society – ultimately deciding on sex trafficking of American children, especially after they discovered via End Human Trafficking on change.org, that possibly one of the biggest hubs is right in their own backyard – Atlanta, Georgia. Primarily considered to be a concern of third-world nations, sex trafficking of American children is a growing epidemic, with as many as 300,000 children being forced into the sex trade, according to Professor Bridgette Carr, director of the Human Trafficking Clinic at the University of Michigan Law School.

The solution to this problem took the form of a simply designed silver tin with the name “American Sex.”  Each tin – a set of 5 tins was created – “contained” a child that can be bought for sex.  Researching consumer psychology and buying patterns in college-aged adults, the students created attractive packaging that would appeal to their audience while also employing selling tactics that would draw attention to their “product.”   The tins were metaphorically ‘sold’ in the University’s rotunda and online at www.wideeyedproject.com.  Stephanie Neal, a member of The Wide-Eyed Project, was quoted as saying, “We could have easily created a series of ‘cause posters’ and called it a day.  But the college culture is saturated with stagnant messaging that have little to no effect.  We wanted to engage the audience, get them involved – to actually hold the message in their hands.” 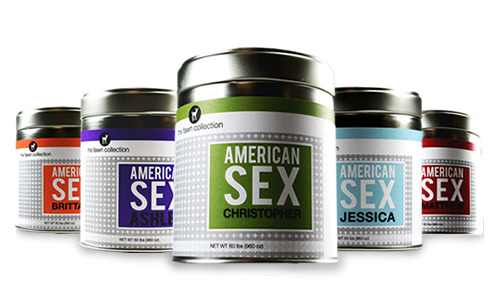 Their idea – perceived by some as controversial – did indeed work.  The audience was willing to buy “American Sex” and, as a result, they walked away with enlightenment. Over 3,000 tins were sold in just the first month the project was live. “This idea is incredibly astute,” says Thomson, “they are essentially using advertising tactics that the audience is responsively conditioned to and subverting these tactics for a more meaningful purpose.”

Over the course of this campaign, interest has reached an international level with site visitors reaching as far as England, Canada, South Korea, and Egypt.  Additionally, over 1,000 people have become fans on Facebook.

Upon learning of the intent behind The Wide-Eyed Project, consumer response has been overwhelming.  With comments such as,

“ Awesome, brilliant, fresh, and innovative.  Congratulations.  Seriously, some of the best marketing / advertising I have seen, hands down.”

“ Way to make a statement and bring the truth home.  Effective.  All I want to do now is help!”

“A unique experience will secure a memory.” Says Thomson.  No one on the Georgia Southern campus is soon to forget the bold and suggestive messaging of “American Sex” and its ultimate objective to change the perception of child trafficking.

Although The Wide-Eyed Project completed their mission, they are still actively spreading information about their cause. During the month of January 2010, they displayed American Sex, including the results of their marketing tactics, in the Legends Gallery at the Averitt Center for the Arts in Statesboro, Georgia. The exhibition included a Brown Bag Lunch where members of The Wide-Eyed Project spoke to guests about the project as a whole.

American Sex is an award winning graphic design endeavor; it won a Gold ADDY® and Judge’s Choice Award for Social Awareness, an award that was invented due to the judge’s reaction to this campaign. American Sex also gained recognition in the District 7 ADDY’s, which includes Tennessee, Georgia, Alabama, Mississippi and Southeast Louisiana, when receiving a Silver ADDY®.

As a result of their wins, the Savannah Ad Federation invited them to speak at their monthly meeting on April 21, 2010. The meeting, Award Winning Advertising Teams present Secrets for Success, promoted The Wide-Eyed Project, “Georgia Southern’s American Sex Campaign takes the observer a second to understand. At first, it appears to be fun satire, and then it grabs you – the satire isn’t fun. By taking an in-depth look at human trafficking in the United States, the campaign is so gripping, the 2009-10 judges created an award just for the piece, Judges Choice Award – Social Awareness.”

Stephanie Arends Neal, Lindsay Byrnside Tyson and Herman Dawson also shared the story of American Sex at University & College Designer’s Association’s (UCDA), annual Design Education Summit from June 2 – 5, 2010.  UCDA is the oldest and most prestigious organization surrounding graphic design academia. “It is a highly competitive platform in which to present research and it is an extraordinary accomplishment that three of our graduate students have been selected to present at this year’s conference,” explained Thomson.

Neal, Tyson and Dawson presented both a paper and a poster display titled, ‘American Sex: Selling Social Awareness Through An Experience’ to professionals from colleges and universities ranging from all over North America. “The conversations with the faculty who sat in on our presentations were great; there were a lot of discussions and thought-provoking questions we hadn’t considered. Presenting at UCDA’s Design Education Summit was an amazing opportunity for us to learn and share research with others,” said Tyson.