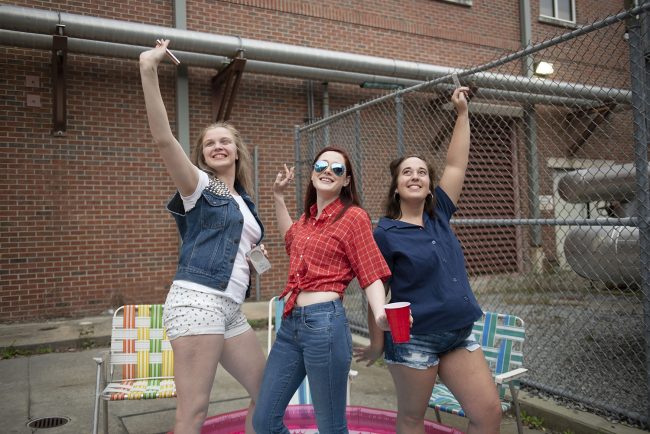 Student theater group, the Masquers are bringing the home of Stark, Florida, residents, Armadillo Acres, to the Georgia Southern University Armstrong Campus during a performance of “The Great American Trailer Park Musical.”

The performance will be directed by professor Pamela Sears, MFA, with music directed by Warren Heilman. The cast and crew is made up of Armstrong Campus students from a variety of majors.

The comedy tells the stories of the residents of the Florida town most exclusive trailer park, Armadillo Acres. Residents include the agoraphobic Jeannie Garsecki and her husband Norbert, the trailer park owner Betty, her friends Linoleum, who is currently waiting for her husband to get out on parole, and Pickles, who suffers from hysterical pregnancies. The trailer park gets turned upside down when a new girl, Pipi, moves in.

“My favorite thing about Jeannie is that she, at first glance, seems like a really weak character, but the more you look and peel back the layers, you really see she’s the strongest one,” said senior theatre major, Olivia Quillman, who plays Jeannie. “Her power shows itself in small and quiet ways at first, but by the climax of the show she’s surrounded by her own power, and it’s beautiful to watch.”

The show’s music and lyrics are by Davis Nehls, and the book is by Betsy Kelso. The New York Sun described it as “‘South Park’ meets ‘Desperate Housewives’ in this big-hearted new musical comedy with a cheeky script.”

“This show genuinely has it all, and it will be fun for audience members to see themselves in each and every character,” Quillman said.

Performances will be held April 11 through 13 at 7:30 p.m., April 14 at 3 p.m. and April 18 through 19 at 7:30 p.m. at the Jenkins Hall Main Stage Theatre on the Armstrong Campus. It is recommended that audience members be 16 years or older for this show. For more information and to purchase tickets, visit georgiasouthern.edu/armstrongtickets.