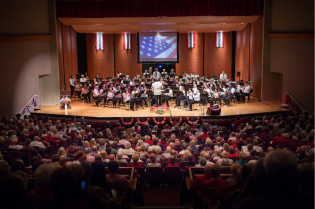 In a musical tribute to those who currently serve or have served in the U.S. Armed Forces, and the nation’s first responders, the Savannah Wind Symphony will present its 40th annual Patriotic Concert on July 1 at 3 p.m. at the Fine Arts Auditorium on Georgia Southern University’s Armstrong Campus in Savannah.

“The Band, soloist and I are honored and humbled to perform this important patriotic musical event for the Savannah community,” said Mark B. Johnson, principal conductor and Savannah Wind Symphony music director for the past 21 seasons. “We are inspired by all the heroes and enthusiastic audiences that make this celebration of America one of our favorite concerts of the year.”

The U.S. Army’s 3rd Infantry Division Honor Guard will present the nation’s colors to open the concert. Deputy Commander Col. Marcus Evans will narrate the poem, “I Am America,” to the performance of “America, the Beautiful.” Vocal soloists Peggy Johnson and Scott Rogers will also perform. In addition, there will be a surprise appearance by one of America’s celebrity personas, who will assist one lucky audience member to guest conduct John Philip Sousa’s “Stars and Stripes Forever.”

Savannah Wind will also pay tribute to Ret. Col. U.S Air Force and Georgia National Air Guard Edward I. Wexler, who is the current Chatham County Veteran of the Year.

The Savannah Wind Symphony is a community wind band serving the Coastal Empire and is comprised of musicians from the greater coastal empire region. The organization is sponsored by the Department of Music on the Armstrong Campus.

The mission of the ensemble is to enhance the cultural climate and appreciation of music in the Coastal Empire by performing public concerts at a high artistic level, to provide a nurturing musical environment to talented young musicians in the company of mature and accomplished musicians, and to identify and support scholarship recipients for advanced musical training at the Armstrong Campus.